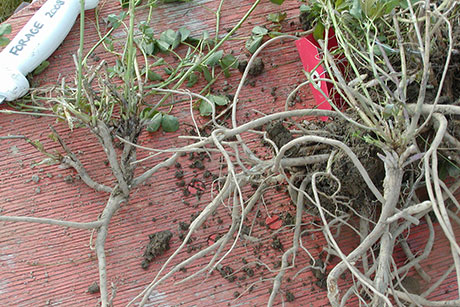 Jamie Crawford
Creeping rooted alfalfa, pioneered for New York’s colder climate by the late Royse Murphy, a professor emeritus of plant breeding at Cornell, and further developed by professor Donald Viands and his team, can be seen spreading from parent plant, right, to new plant, left. This ability to spread makes this forage crop ideal for pastures. 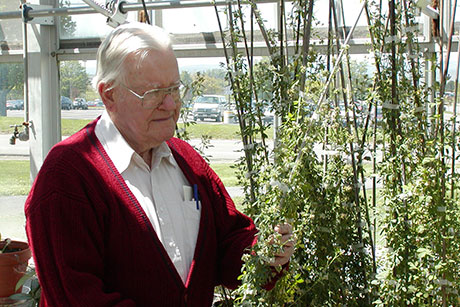 Jamie Crawford
The late Royse Murphy, professor emeritus of plant breeding at Cornell, inspects seed production on an earlier version of SW 215CR, a creeping rooted alfalfa variety, in a greenhouse at the Guterman Research Center. 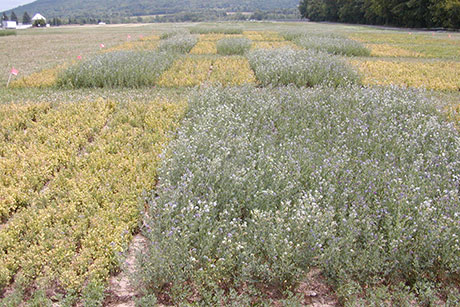 Julie Hansen
Potato leafhopper-resistant alfalfa stays green and produces forage in spite of the presence of damaging populations of the agricultural pest, compared to conventional alfalfa that turns yellow and has reduced forage yield, during Alfalfa plot trials overseen by Cornell.

Dairy and other livestock farmers in the northern U.S. have three new alfalfa options this growing season – all pioneered by Cornell researchers as a way to combat devastating pests, increase yields and improve forage quality.

Developed by Donald Viands, a professor of plant breeding and genetics in the School of Integrative Plant Science, along with senior research associate Julie Hansen, Ph.D. ’89, and research support specialist Jamie Crawford ’01, these new varieties were grown in Cornell greenhouses and tested for resistance in farm fields across the state.

The first variety, SW 9558SBR, provides resistance to the alfalfa snout beetle, which can cripple root systems. Viands said this project was a collaborative effort among plant scientists Elson Shields and Tony Testa in the Department of Entomology, extension educators and farmers. In trials, researchers have found this variety provides a half-ton increase in yield per acre.

The developers said seed companies are interested in selling SW 9558SBR to combat the snout beetle following a dramatic increase in the insect’s population over the past decade. The alfalfa snout beetle, currently confined to northern New York state, has the ability to spread to surrounding states and Canada.

“It’s easy to overlook this problem,” said Hansen. “Beetles burrow in hay bales and if only one insect gets transported, populations can grow rapidly.”

A second new alfalfa variety, SW 315LH, combats the potato leafhopper – an insect Hansen called “the most furious pest on alfalfa in all of North America.” The pest does not overwinter but arrives each year from the south carried by early spring thunderstorms. While the insect is found throughout the central and northern United States, Hansen said SW 315LH is the first potato leafhopper-resistant variety of alfalfa that is well-adapted for New York.

The third variety, SW 215CR, is geared to bolstering New York’s alfalfa cultivation and is the culmination of a project spearheaded by the late Royse Murphy, professor emeritus of plant breeding. This “creeping rooted” variety helps alfalfa grow in adverse conditions because its root system swells and grows laterally.

Murphy began work on the variety decades ago. After Murphy retired in 1979, Viands took on the project with Murphy contributing research well into his retirement. Murphy died in 2012.

“Creeping rooted is not really a new trait, but Murphy successfully bred it into Northeast conditions,” said Viands. “This variety will be effective in New York state and surrounding states, building pasture longevity.”

“The College of Agriculture and Life Sciences is unique for [doing] this type of work,” said Viands. “Through collaboration with researchers, extension educators and farmers, we can help advance the land-grant mission throughout the state.”

These varieties have been ongoing, collaborative projects for years and are funded primarily by Federal Hatch Funds through the Cornell University Agriculture Experiment Station as well as the Northern New York Agriculture Development Program and New York Farm Viability Institute.

Alex Koeberle ’13 is a freelance writer for the College of Agriculture and Life Sciences.