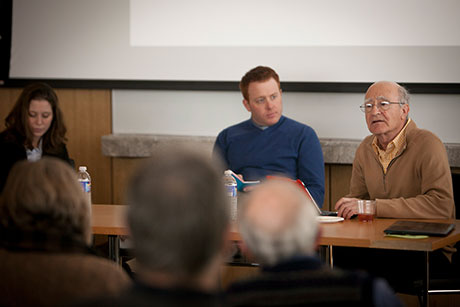 Jason Koski/University Photography
Sidney Tarrow, professor of law and government, speaks at a panel discussion Feb. 27 on the rise of the radical right wing in Europe, organized by the Mario Einaudi Center for International Studies. The panel also included Mabel Berezin, professor of sociology, Seth Jolly from Syracuse University and Robin Best from SUNY Binghamton.

Western Europe is home to some of the oldest democracies and most stable political party systems in the world. In recent decades, however, Europe’s political landscape has been shifting, paving the way for radical right-wing parties like France’s National Front to gain support.

Panelists spoke about the rise of Europe’s radical right wing at a roundtable Feb. 27 in a discussion series organized by the Cornell Institute for European Studies in light of the January Charlie Hebdo magazine shootings in Paris.

“[The attacks on] Charlie Hebdo have given legitimacy to the claims that Islam and Islamic extremism are dangerous,” said panelist Mabel Berezin, Cornell professor of sociology in the College of Arts and Sciences. Berezin described how the resulting cultural tension has converged with economic insecurity from the European debt crisis to foster new support for radical right-wing political parties. The result is “a dangerous economic, political and cultural synergy that is driving [European] politics in troublesome ways,” said Berezin.

Robin Best, assistant professor of political science at SUNY Binghamton, explained that the number of far-right political parties in European countries has been on an upward trend for the past 60 years. These parties have gained support by championing traditionally left-wing populist policies such as generous welfare benefits and full employment, Best said.

Seth Jolly, assistant professor of political science at Syracuse University, described one radical right-wing organization’s attempt at anti-Islam protests in Cologne in December and January: “[The protestors] were hoping for a turnout of 10,000 to 15,000 people. They got 100 people. And instead, 10,000 counter-protestors showed up,” Jolly said. “The Cologne Cathedral even shut off its lights so that the protestors would have no light.”

Tarrow expressed concern about how the residual effects of Charlie Hebdo will influence European politics in the future. He cited a study that examined changes in anti-Muslim sentiment following attacks by radical Islamic terrorist organizations. “It turns out that anti-Muslim sentiment grows slowly and surely, just not in the immediate aftermath of these events,” said Tarrow. “My worry is the long-term effects, rather than the short-term effects, of Charlie Hebdo.”

Jolly suggested: “It’s not just the bad stuff that we’re seeing. It’s not just the anti-Islamic attacks and the synagogue burnings ... There’s also a pushback from the more cosmopolitan multicultural Europe, which I see as positive.”

Berezin warned that the rise of Europe’s radical right should not be taken lightly, citing France’s 2012 elections, where as many people voted for political extremes as for mainstream parties. “The sovereign debt crisis has been an opening for these [radical right] parties to come to the fore,” said Berezin.

Josephine Engreitz ’15 is a writer intern for the Cornell Chronicle.