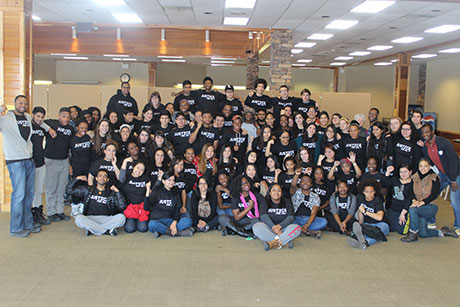 Misha Inniss-Thompson
At the end of the Posse Plus Retreat, participants gathered wearing "Justice for All" T-shirts created by the Posse Foundation.

More than 100 students, faculty and staff took a break from campus Feb. 13-15 on the annual PossePlus Retreat hosted by the Posse Foundation.

The theme of this year’s retreat, Crime and Punishment, was chosen by Posse scholars. The retreat was held at the Bryn Mawr Mountain Conference Center in Honesdale, Pa.

“This year’s retreat topic came at a critical time where much of the country is engaged in discussion and protest around crime and punishment in America,” said Jarrel Johnson, assistant dean for admissions and advising in the College of Arts and Sciences and program manager for Cornell’s Posse Program.

Participants learned about the U.S. prison and justice system and took part in activities that led to discussions about changes that need to be made in the system.

During one activity, small groups were challenged to create their own society and decide from a list of crimes which would be penalized the hardest, said Tredarin Webb ’18, an Arts and Sciences student.

“The theme resonated with me personally because as an African-American male, I am aware there are certain injustices within how this country defines justice,” Webb said, adding that he’s had unfriendly encounters with police. “I quickly learned to act a specific way when I am around authority. However I also have a childhood friend whose father is an officer, so that made me aware that most cops were good people.”

In another exercise, on stereotypes, participants were given various locations such as an airport or street, then asked to write about a person who would make them feel unsafe in that situation using descriptors such as race, clothing and demeanor.

“Being forced to confront our own deeply held stereotypes was difficult, yet immensely cathartic and constructive,” said Conor Hodges ’18, also a student from Arts and Sciences.

“I was having trouble finding a good forum for discussion [on events like Ferguson],” said Ari Boltax, a first-year veterinary student, talking about why she attended the retreat. “I want to help, really I do, but I kept hearing things like ‘you're white, so you won't ever really understand. Just be an ally.’

“I was waiting for the retreat to have that safe space to finally hear what I wanted to hear, say what I wanted to say, and really critically evaluate everything from a bunch of perspectives,” she said.

Johnson said the retreat serves multiple purposes and hopes that students return energized to make a difference on campus.

“Many of the participants discover that they have similar interests when it comes to social justice topics,” Johnson said. “So essentially the retreat forges new connections for students, faculty and staff.”

One student shared his plans for a campus conference focused on teaching people how to peacefully and effectively protest for change, Johnson said.

“I returned from the retreat with my views on the need to restructure the system in pursuit of restoration rather than retribution solidified,” Hodges said. “I believe that America can do better than a system that disproportionately punishes members of minority groups and pursues vengeance rather than rehabilitation. Posse innervated me to lend my labor to this goal through preexisting but understaffed avenues on campus.”

Webb said he also was motivated by the retreat.

“The main benefit was in essence peeling of this sort of mask that I have on campus,” he said. “I was able to share my personal views and opinions comfortably, which helped foster a strong sense of community that I have yet to feel on campus. I came back to the campus wanting to get more involved in the community and developing the Posse Plus family that this retreat created.”

Kathy Hovis is a staff writer for the College of Arts and Sciences.