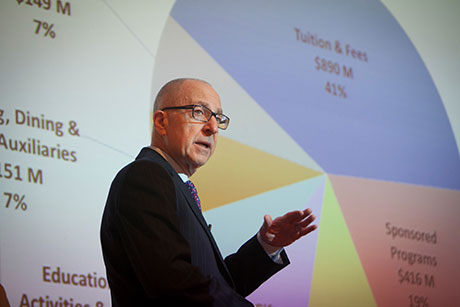 Town hall questions answered
During the presentation, President David Skorton encouraged community members to submit questions online. The answers to those questions have been posted as a pdf at president.cornell.edu.

“Today is an attempt to move forward with broader transparency,” said Skorton. “The goal of this conversation … is to engage the campus community in a discussion of values and priorities to make critical choices.”

Before an audience of about 150 at G10 Biotech Building and nearly 800 viewers watching on CornellCast, Skorton delved into financial accounting methods, the university’s monetary challenges, its endowment and the reality of reduced state and federal government funding. And he offered suggestions for moving forward, as he enters his final 100 days as president.

Skorton reviewed the 2008-09 financial scenario during the Great Recession, when Cornell faced a $100 million deficit that was projected to grow to $200 million by 2014 if measures hadn’t been taken. Since 2009, the university has maintained a balanced budget by way of staff retirement incentives, faculty bringing in more grants and increases in tuition. In that recessionary period, the staff was reduced by 8 percent.

Skorton explained that with 15,700 employees, Cornell is the 14th largest employer in the state. Approximately two-thirds of the fiscal year operating expenses for the Ithaca campus is designated to space and salaries, or about $1.5 billion of a $2.2 billion budget.

Skorton said he understands that it must be jarring to watch a successful fundraising campaign, only to observe university budget cuts. On one hand, the university’s sound long-term investment performance, robust fundraising, a growing presence in New York City, increased demand for a Cornell education, as well as diverse revenue sources are among the university’s strengths, he said. But with slightly lower bond ratings left over from the Great Recession era, matched with reduced federal research funding and state appropriations, Cornell has little financial flexibility to take on new investments. The university increasingly relies on short-term strategies to balance its operating budget. Universitywide, there is only a $9.4 million margin in a budget of $3.8 billion.

Skorton said a communitywide effort is needed to make the university stronger financially. Through direct communication with his own office or through faculty, student and staff assemblies, or by way of departments and colleges, “We have to decide as a community how we are going to return to financial flexibility – to a greater degree – to Cornell University,” said Skorton. “Could we get by the way we are now? Yes, we could. … What’s missing is the chance to dream our dreams and have increased flexibility.”

Looking forward, Skorton said that the university will need to identify new revenue sources, decrease expenses, reduce administrative redundancies, focus on infrastructure upkeep, and manage workforce levels to conform with strategic priorities. “We have to align the amount of work we’re asking people to do with the number of people available to do that work, and [we] cannot continue to just unload additional work on a shrinking staff pool,” he said.