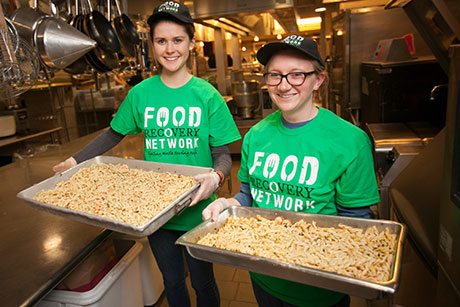 Jason Koski/University Photography
Celina Scott-Buechler '18, left, and Erica Rausch '15, of Cornell's Food Recovery Network spread food out to cool. The food will be distributed to food pantries across Tompkins County through the Friendship Donations Network.

Every Thursday night around 8 p.m., several students trek to Becker House and the Robert Purcell Marketplace Eatery to take small amounts of food from the kitchen warming ovens, cool them rapidly and load them up for the Friendship Donations Network to distribute to food pantries across the county.

“The food amounts are small and vary week to week,” said Tony Kveragas, chef manager of Carl Becker House. “But, in the interests of sustainability and community service, these students formed the Food Recovery Network (FRN) to complete the connection between these leftovers and a community agency, the Friendship Donations Network.” The agency has been a recipient of United Way of Tompkins County funding to help combat hunger and food insecurity.

“The Food Recovery Network is a simple program that could grow and make a significant difference,” said John Lowry ’16, who spearheaded formation of the FRN and co-directs it with eight other student volunteers. He was motivated to do something to address food security issues when he took a Cornell course, Sustainable Lifestyles, while also working in dining services.

“That class helped me appreciate the value of our leftover meals,” Lowry said. “Through middle school I had volunteered at my hometown food pantry and so the topic of hunger was not foreign to me. But the hunger in my hometown pales in comparison to Tompkins County where around 13,000 people go hungry on a regular basis. I learned we had the power to change that.” One of his friends, Erica Rausch ’15, suggested that Cornell form a chapter of the FRN.

Help end hunger
Cornell has embarked on a fundraising campaign for the Hunger and Food Security Fund through March 31 as part of its United Way campaign to address the growing hunger crisis in Tompkins County and the surrounding area. As of Feb. 27, $8,435 has been raised by 89 donors from Cornell. Your contribution – no matter how small – will make a difference. Contribute to the Hunger and Food Security Fund here.

But a simple idea can have a complex implementation. Public health laws prohibit food offered buffet-style to be reused or donated once it has been put out. They also dictate how food must be handled, the training that handlers must receive, and the temperatures that must be maintained during food transport. Cornell’s risk management office also had concerns.

And, Lowry learned, Cornell Dining closely estimates the amount of food it prepares for each meal, using much of the food it has not served for entrées the next day. The amount that legally can be given away is minimal. Cornell Dining also already has a formal partnership with the Food Bank of the Southern Tier to donate perishable items such as lettuce and milk that cannot be held over breaks or the summer.

But Lowry had the support of Kveragas, who was impressed by his earnestness and determination. FRN volunteers also worked with Therese O’Connor, Cornell Dining’s assistant director for staff development and training and assistant director for sustainable initiatives oversight, to learn necessary protocols and acquire the needed training and equipment.

Professors Jane Mt. Pleasant, who served on the Friendship Donations Network board of directors, and Robert Gravani, who helped submit a detailed proposal to the Tompkins County Health Department, also championed the group, and work on a pilot program in Becker House began in fall 2013.

“The Becker pilot program ran 10 perfect recoveries and has now expanded to the Robert Purcell Marketplace Eatery, thanks to FRN volunteer Courtney Dennee ’15, student manager at the eatery,” Lowry said. To ensure that the program continues to grow, the FRN board also includes younger classmates such as Celina Scott-Buechler ’18, serving as secretary, and Lucy Dean Stockton ’17, public relations. FRN volunteer coordinator Rausch recently recruited and helped train eight new volunteers. “We now have all the volunteers we need for the two locations, but we are always looking for more who would like to join us,” she said.

The original leaders will step into an advisory capacity next year, Lowry said. “We know that if we have dedicated, driven volunteers, the FRN can expand to more dining locations and continue long after we have graduated,” he said.