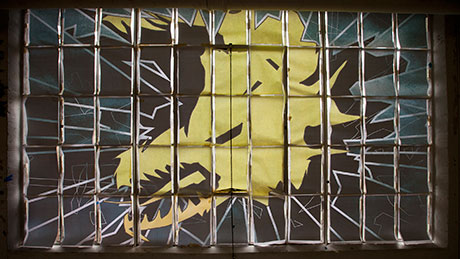 Jason Koski/University Photography
An image of the 2015 Dragon fills the windows of Rand Hall. 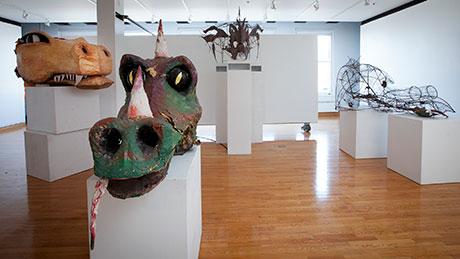 Jason Koski/University Photography
A selection of "trophies" from past Dragon Day celebrations is on display through March 27 in the John Hartell Gallery in Sibley Dome. 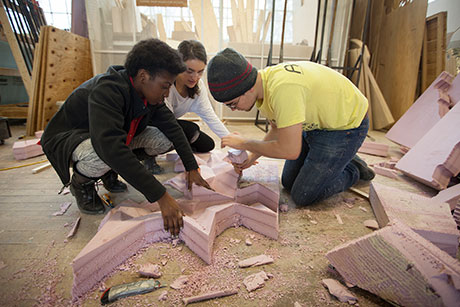 Jason Koski/University Photography
Yimika Osunsanya, Lucy Flieger and Tommy Musca cut out a section of foam core that will be sandwiched together to form the dragon’s head March 24 in the Rand shop. 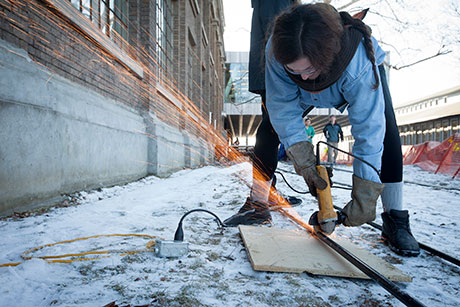 What does it take to make a dragon?

What goes into the making of Dragon Day?

The imagination, technical knowledge and labor of 52 first-year architecture students, who carve out time for the extracurricular project between classes and during nights at their studio workstations in Milstein Hall or in the Rand Hall shops.

The annual Dragon Day celebration is a teambuilding effort for the students and a spring ritual on campus. The colorful 114-year-old Cornell tradition continues March 27 with the first-years accompanying their creation in a parade at 1 p.m., on a route circling from Rand Hall to the Arts Quad.

“We’ve gotten very close as a class,” said Dragon Day co-president Ainslie Cullen, B.Arch. ’19. “The pace of all our classes this year has picked up and having this on top of it has been stressful.”

“We had to do a lot of yelling to get this started,” said co-president Maddy Eggers, B.Arch. ’19.

The co-presidents were elected to lead the Dragon Day effort in the first week of classes, and “within a couple of weeks we were starting a design process,” Cullen said. “We had to wrangle everyone to pick a theme.”

Borrowing the theme of “Apocalypse” from Mayan prophecy, the students are tying it to Cornell’s sesquicentennial through such design elements as a “150” on the McGraw clock tower about to be destroyed by the dragon on the event T-shirts, sold to raise funds for the next class of first-years.

“We’re the first freshman class on the plate [Milstein Hall’s second-floor home base, the L.P. Kwee Studios for architecture students], and the upper-years are always circling around our desks, asking us how it’s going,” Eggers said.

The T-shirt design features a subtle image of a phoenix as “a little toss to the engineers,” Eggers said, referring to the architects’ Dragon Day rivals.

“This year we’re getting a little friendly pushback from them,” she said. “They know what Dragon Day is, and they’re willing to participate in good humor, without being totally aggressive about it.”

As in past years, the class holds T-shirt sales on campus, decorates the windows of Rand Hall and creates promotional material leading up to Dragon Day. The design aspect changes from year to year. Architects are used to making models, but not models of dragons.

“What’s never been done before with the dragon is digital fabrication,” said Eggers, who worked on a design for the head, creating a digital model that she calls a “self-intersecting geometric nightmare.”

The dragon’s head is a complex polygon with 2,358* individual geometric surfaces, carved out of foam on a router from a digital file. There are 12 layers in all, or two sides of six layers that are all glued together. The rest of the body is on a steel frame, being welded and painted by a construction team led by classmates Steven Ren and Jeff Drexel.

Eggers’ interest in digital fabrication had her approaching the dragon as “an architectural design problem,” she said. Cullen was interested in textile design and fashion, “and I found a cool way to use that in the dragon. We really used everybody’s strengths in creating the coolest dragon ever,” Cullen said.

(*Attempts to compare that figure to the number of scales on an actual dragon’s head proved difficult, as zoological specimens are scarce.)