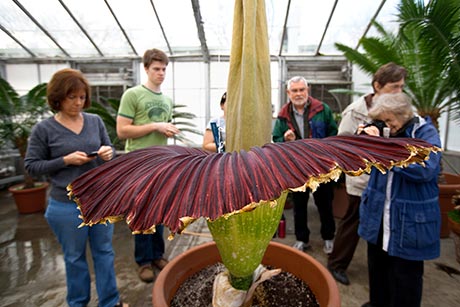 Researchers working with Cornell’s collection of rare titan arum plants are hoping three blooms will point them toward answers.

For those who may have missed it, one of Cornell’s titan arums – a tropical plant native only to Sumatra and famed for its giant corpse-scented flower – famously bloomed for the first time in the spring 2012. The event drew international media attention and thousands of visitors to the Kenneth Post Laboratory Greenhouses.

It also offered researchers throughout the College of Agriculture and Life Sciences a rare chance to study the complex biology of this unique reproductive spectacle. The massive bloom stayed open for days, lines of visitors snaked along hallways and sidewalks, and nascent insights into the subtle biochemistry of the bloom were born.

Then, in an unexpected turn in the fall of 2014, that same plant, dubbed “Wee Stinky,” flowered once more. Researchers including neurobiology and behavior professor Rob Raguso and plant biology professor Karl Niklas, graduate students Gwynne Lim and Kyle Martin, and greenhouse grower Paul Cooper got ready to see if this second event on their titan arum timeline would point to patterns in the still-mysterious plant’s behavior.

But Wee Stinky had a few surprises.

This time blooming under shortened late-fall sunlight, Wee Stinky opened fast, accelerated the temperature of its towering central spadix to more than 106 degrees (more than 31 degrees above the surrounding greenhouse) and began to wilt before the next dawn. Fewer visitors, fewer views, more questions.

“We don’t really know why Wee Stinky bloomed again so quickly, mostly because research on Amorphophallus titanum reproductive biology is hampered by its long turnover and unpredictability,” Lim said. “There is simply not that much known about them.”

Lim said researchers did note a repeat of previously observed pollinator-attracting “scent volatiles,” offering new insight into the science of plant reproductive biochemistry, but this very different bloom made it impossible to draw conclusions about what can be considered the norm for titan arums.

“Many of these questions cannot be answered definitively as we have only one other event to compare it to, and thus any generalizations are not really evidence based,” Lim said. “The data we have definitely gave us a lot of ideas, but we are still trying to unpack the signal from noise.”

The good news – it may soon be unpacking day.

Wee Stinky’s sibling, one of the original four titan arums in Cornell’s collection since 2002 and a mere 55-pound corm (a suitably giant bulb-like mass) on display during the 2014 bloom, now is pushing its flower up from beneath the soil. Cooper, who leads hands-on care of Cornell’s titan arums, said he expects big things this time.

First, the massive corm likely means this as-yet-unnamed titan arum has enough stored energy to put on a great show. Second, this bloom is expected in mid-June (although Cooper still hopes it might put on a show for Reunion Weekend, June 4-7), under even sunnier skies than its tropical island home. Lastly, Cooper said he’s already comparing the growth rates of the new titan to Wee Stinky, and this one shows signs of being ahead of the curve.

“It’s optimum conditions this time,” Cooper said. “It should be a great bloom.”

This third bloom from a new plant also means new opportunities for researchers. Carefully measured biochemical and physiological details of the previous blooms – where those details agreed – may now be confirmed. In the many areas where the blooms differed, researchers will have a vital third data point to offer weight to one behavior or another or to show a new pattern and shed light on the complex mystery that remains about titan arum.

Thanks to its June arrival, this corpse flower may be on display in the soon-to-be reopened Liberty Hyde Bailey Conservatory off Tower Road. The new space, with more advanced lighting, monitoring and viewing areas, could offer an unprecedented public showcase for the enigmatic bloom.