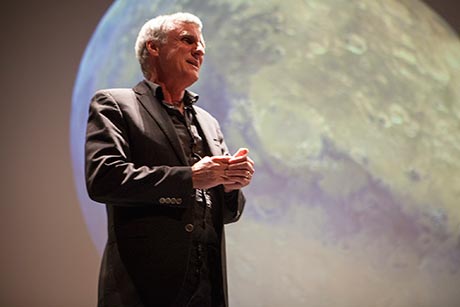 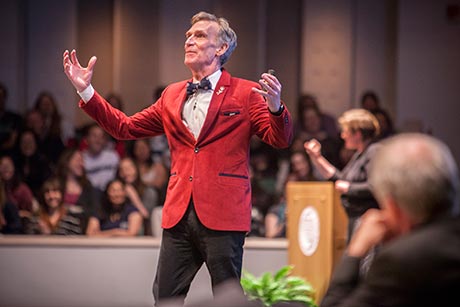 Squyres, the James A. Weeks Professor of Physical Sciences, and science popularizer Nye, president of The Planetary Society, shared their thoughts in “Cornell and the Joy of Discovery: Any Person, Any Planet.” Introducing them, Joe Burns, dean of the university faculty and professor of engineering and of astronomy, said their contagious enthusiasm would become “packaged energy” on stage. Burns’ prophecy rang true; when Squyres and Nye finished 70 minutes later, not a soul wanted to leave.

Squyres recounted a brief history of exploration on Earth and other planets in our solar system, including missions involving Cornellians. The adventure of exploration allows people, groups and nations to progress, he said. “When you step away from the spirit of adventure, you step away from other things as well,” said Squyres, noting China once ruled the seas with enormous ships then suddenly stopped exploring – but recently has begun exploring again, this time in on the moon and in space. “… a willingness to be driven by a spirit of exploration, a spirit of adventure, is a necessary thing for any great nation. It is a good thing for any organization. It is a good thing for any individual.”

Of Ezra Cornell’s “any person, any study,” Squyres said: “What a glorious adventure it has been to strive toward that goal for 150 years.”

From a global perspective of exploration to a more personal talk, Nye spoke in detail about his mother and father. Nye said his father – a Japanese prisoner of war for the entirety of World War II – had a passion for sundials, and Nye caught the bug. Decades later, he suggested that sundials be incorporated into the Mars rovers Spirit and Opportunity.

“Astronomy has enabled so much of what we all know,” Nye continued. “Astronomy is why we have global positioning, cell phones. Astronomy is how people navigated the whole world across the trackless sea looking at nothing but the sun and stars to find their way.”

“Our ability to reckon time has changed the world far more than the invention of the wheel,” Nye said. In 2011, Nye designed, acquired funding and helped to build a “solar noon” clock – which lights daily atop Rhodes Hall when the sun culminates at its highest point in the sky.

“So, my fellow Cornellians, I just want to remind you that this is part of your legacy. … [explorers are] going to make mistakes; accidents are going to happen – but they’re going to explore just to learn more about the cosmos and our place within it. This is exciting stuff … Let us all celebrate the joy of discovery.”