Genomic studies have illuminated ways that malfunctioning genes can boost cancer growth – all the while stunting the therapeutic effects of chemotherapy and other treatments.

Weill Cornell Medical College researchers indicate that genes are only partly to blame for why effective treatment fails in about 40 percent of patients diagnosed with the most common form of non-Hodgkin lymphoma. The study was published April 20 in Nature Communications.

Results suggest global changes in cancer cells’ epigenome that turn normal genes “on” when they should be “off,” and vice versa, may be a powerful force in determining disease progression. The researchers reviewed biopsies taken from patients with diffuse large B-cell lymphoma (DLBCL) before treatment and again after the treatment failed and cancer resurged. By comparing the two samples the scientists found the epigenome in patients’ cancer cells had substantially changed after treatment.

The epigenome, which surrounds genetic DNA like a bubble, is powerful, as it can determine which genes are turned on or off, influencing the production of proteins – the workhorses of human biology. Further, the epigenome can modify gene expression by adding or removing a chemical compound, known as a methyl group, to a specific place in a gene’s DNA. Adding a methyl group to a gene turns the gene off, and removing a methyl group allows a gene to turn on – when it should not. 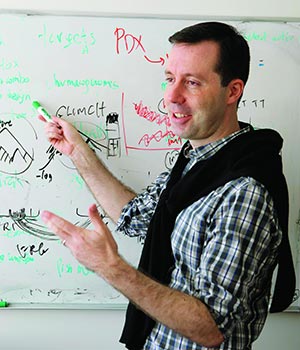 “This is the first study I know of in cancer that looks at changes in the epigenome before and after treatment, and what we found could ultimately make traditional treatments much more effective,” said senior author Dr. Olivier Elemento, associate professor of physiology and biophysics at Weill Cornell Medical College. He leads the Laboratory of Cancer Systems Biology in the HRH Prince Alwaleed Bin Talal Bin Abdulaziz Al-Saud Institute for Computational Biomedicine. “The epigenome is flexible and can change faster than the genome can, but changes in the epigenome are lasting – they are maintained from one cell division to the next,” he said.

Epigenetic modifications can be inherited, or may be influenced by a person’s environment, such as diet and pollutants. Yet the cause of global epigenetic changes in cancer, including DLBCL, is unknown, Elemento said..

In each sample set, investigators looked at sites in the epigenome where a methyl group was added or removed after cancer recurred. They found a change in methylation that occurred between 39,808 and 1,035,960 specific methylation sites, depending on the cancer sample. In addition, they identified between 78 and 13,162 differently methylated regions in the epigenome in relapsed cancer.

“These are massive changes – given that the epigenome has 20 million methylation sites, our study shows that in some cases, up to one-twentieth of the entire epigenome is changed after treatment,” Elemento said. “There are many more epigenetic changes than there are altered genes in DLBCL.”

“Once you have changes in methylation, the end result is an imbalanced expression of proteins,” added Inghirami, a professor of pathology and laboratory medicine at Weill Cornell. “The tumor after chemotherapy is not the same as the tumor before treatment. This why it is so critical to have biopsies before any treatment of either primary [or] relapsed lesions.”

Given the importance of the epigenome, the researchers hope that this work will ultimately allow clinicians and researchers to predict treatment resistance in individual patients. Said Tam: “By studying more samples, it may ultimately be possible to scan the most informative regions of the epigenome of a patient’s lymphoma at diagnosis to predict whether treatment will be successful and whether the cancer may recur.”