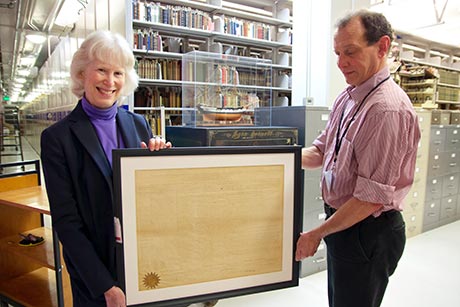 Joe Wilensky
Elaine Engst, Cornell University archivist, and Lance Heidig, outreach and learning services librarian, remove Cornell University’s original charter from the vault in Kroch Library Friday morning for use in a special sesquicentennial exhibit today through Charter Day Weekend. Behind them is Ezra Cornell’s personal safe, in which small items of great value are stored, including two Nobel prizes and an Olympic gold medal owned by Cornellians.

Charter Day Weekend is here: a multiday, on-campus and around-the-globe celebration of the 150th birthday of Cornell’s beginning. While the university officially opened in October 1868, the signing of the charter more than three years earlier founded Cornell University.

On April 27, 1865, the governor of New York, Reuben Fenton, signed into law Cornell University’s charter, with members of the board of trustees holding their first meeting in Albany the next day. Not long afterward in Ithaca, Ezra Cornell, his son Alonzo Cornell, Andrew Dickson White and trustee Francis Finch walked together along a ridge overlooking the Cayuga Lake valley, evaluating the lay of the land for a prime spot to erect the university’s first buildings.

What’s in the Charter?

Of the 10 charter trustees in Section 1, two besides Ezra Cornell would became long-standing supporters of the university with buildings bearing their names: John McGraw and Hiram Sibley. Horace Greeley, a former U.S. congressman and editor of the New-York Tribune, was also among the charter trustees.

Charter on view at Cornell Library
The Division of Rare and Manuscript Collections will be open for extended hours over Charter Day Weekend so that visitors can view and experience Cornell University Library’s sesquicentennial exhibitions: “Lincoln’s Unfinished Business” and “150 Ways to Say Cornell,” in addition to viewing the original charter (in Hirshland Gallery). University Archivist Elaine Engst and others will be on hand to chat with visitors on Saturday and Sunday afternoons and to provide information about Cornell’s special collections and university history.

The charter references the Cornell library, which was Ithaca’s public library, given to the community by Ezra Cornell in 1863.

Section 2 also names as a trustee “the eldest male lineal descendant of Ezra Cornell.” That position is held by Ezra Cornell ’70; the word “male” was removed in 1983 to pave the way for his eldest daughter, Katy Cornell ’01.

Section 4 defines the goals of Cornell: “to teach such branches of learning as are related to agriculture and the mechanic arts, including military tactics, in order to promote the liberal and practical education of the industrial classes in the several pursuits and professions in life.” But other sciences and knowledge may be taught “pertaining to the university as the trustees may deem useful and proper,” leaving flexibility for programs in fields like hotel administration and labor relations.

To get Cornell’s charter through the New York Legislature, political opponents forced Ezra Cornell to include provisions in the charter supporting other small agricultural colleges that had competed for funding from the Morrill Act. “Ezra Cornell of Ithaca shall pay over to the trustees of Genesee College located in Lima in this state, the sum of twenty-five thousand dollars.”

Section 9 affirms Cornell’s commitment to economic diversity, stating that the university would be open to anyone “without distinction as to rank, class, previous occupation or locality.”