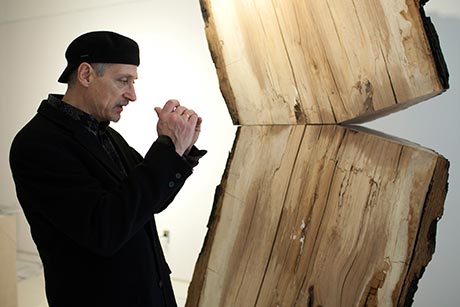 Robert Barker/University Photography
Jack Elliott in Human Ecology's Jill Stuart Gallery, with one of the sculptural pieces in his "Carya" exhibition.

Artist Jack Elliott looks at trees and sees relationships between nature and human forms, architecture and culture. His most recent installation connects these themes to Cornell and its sesquicentennial celebration, with classical plaster casts, contemporary sculpture and a 150-year-old tree as centerpieces.

The exhibition, “Carya: Women, Buildings, Nature: Hellenic Themes, Contemporary Works,” opens on Earth Day, April 22, with a reception at 4:45 p.m. in the Human Ecology Building’s Jill Stuart Gallery. The exhibition is open to the public through June 19.

The display positions classical 3-D artworks – including a large figure of the goddess Artemis that is part of Cornell’s Plaster Cast Collection and a reproduction of the “Lonely Caryatid” Elgin marble taken from the Parthenon – alongside parts of trees that Elliott sculpted as corresponding forms.

“I like the idea of finding statements about the contemporary condition in these ancient forms, and in the myths and origins of architecture,” said Elliott, professor of design and environmental analysis (DEA) in the College of Human Ecology.

The display incorporates bark and sculpted segments of the 150-year-old Bridgeport hickory, a massive shagbark hickory tree that fell in a storm near Seneca Falls, New York. Elliott and a team of students and workers extracted the tree from the site in sub-zero weather last winter and prepared it at the High Voltage Lab off campus.

A section of the bark (11 feet long and about a third of the tree’s 18-foot circumference wide) has been installed at the gallery entrance.

“We cut the tree into two halves, and used the biggest intact piece of bark to get the sense of drapery,” also echoing the classical statuary, Elliott said.

Elliott’s idea was to connect the hickory tree’s species, “carya,” to caryatid statues – carvings of draped female figures, used as pillars in classical Greek architecture. In Greek mythology, these young women were spoils of war from a region of the Peloponnese, known for their worship of Artemis, goddess of nature and the hunt. Their use in architecture also expresses servitude and veneration.

Architectural drawings on the gallery walls show the classical elements of Martha Van Rensselaer Hall, constructed in 1931-33 for the then-College of Home Economics. “This ties some of the themes to our own building – this was intended as a building for young women,” Elliott said.

Elliott enlisted consultants as collaborators on the project from the Herbert F. Johnson Museum of Art and the Departments of Classics and History of Art. The installation also serves as an adjunct to the College of Arts and Sciences’ “Firing the Canon” sesquicentennial display of plaster casts, and the Johnson Museum exhibition “Cast and Present: Replicating Antiquity in the Museum and the Academy.”

Undergraduate research assistants, including Nick Teaford ’15 (an interdisciplinary studies major studying sustainable design), have been involved in the project, from the hickory tree’s removal and preparation to the final installation. DEA major Katrina Stropkay ’17 did archival research for the exhibition’s interpretive text, “trying to find and create connections between the various components of Jack’s exhibit,” she said.

Stropkay looked into Greek and Roman mythology, the history of the college and its architecture, and tree taxonomy – and found herself “taking an enormous step back in developing a metaphorical connection between so many different disciplines and ideas. Ultimately I was trying to strengthen the artistic thesis about the connection between women, nature, mythology, the built environment and our college itself. [The work] was both intellectually and technically very challenging, but I came away with a more holistic perspective on interdisciplinary research, art and design.”

Elliott’s other “arbortecture” installation on campus is “Five Uneasy Pieces,” continuing through April 30 in Cornell Plantations’ Nevin Welcome Center and using the remains of the Plantations’ Treman Weeping Willow, an 80-year-old heritage tree cut down in 2011 after it was weakened by age and carpenter ants. The installation also references classicism, gender and the human-nature relationship, Elliott said.