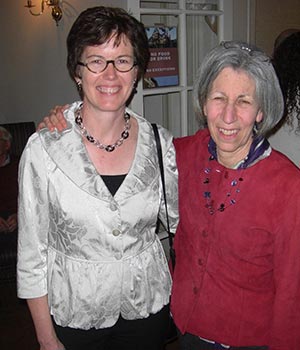 Mary Fainsod Katzenstein’s 40 years of leadership, teaching and scholarship at Cornell were honored April 22 in A.D. White House. She was feted with speeches and gifts commemorating her leadership in the Cornell Prison Education Program (CPEP).

Katzenstein was instrumental in securing funding and support to expand CPEP, which was founded by Pete Wetherbee, the Avalon Foundation Professor in the Humanities Emeritus; the program now leads to an associate’s degree from Cayuga Community College. In recognition of her leadership, David Roth, supervisor of volunteer services at Auburn Correctional Facility, presented Katzenstein with a prison-made license plate bearing the word “volunteer” and a knitted gift from the Auburn knitting group Katzenstein co-founded.

A man who studied with CPEP while in prison recalled, “the sight of this tiny woman crossing an exercise yard full of prisoners and braving the risk to teach us and bring us hope. I wish to thank Professor K on behalf of all those men you believed in and for possessing the courage to act upon those beliefs.”

A professor in the Department of Government and the Feminist, Gender and Sexuality Studies Program, Katzenstein is the first Stephen and Evalyn Milman Professor of American Studies. In a note read at the May 22 event, the Milmans described Katzenstein as a “first-rate scholar and a wonderful teacher.”

Gretchen Ritter, the Harold Tanner Dean of the College of Arts and Sciences, noted that she has known Katzenstein since she was a student at Cornell. “She was a very popular teacher, and I had to fight to get into her class,” Ritter recalled, adding, “one of the things I really admire and respect about Mary is she cares about things … in a way that is really rooted in her deep sense of humanity. She is the kind of person who points out uncomfortable social issues in ways that people can hear them. She is, as she has been since I was a teenager, a role model for me.”

Rachel Harmon ’15, former TA for CPEP and 2015 Rhodes scholar, said Katzenstein “pushed us beyond our assumptions, to challenge each other, and created a class that was fundamentally inclusive.” Jessica Stewart ’15, a Merrill Presidential Scholar in ILR, agreed, saying Katzenstein “goes through life creating transformative experiences … she invites us all to be as exemplary as she is.”

Katzenstein’s many accomplishments include seven books, 39 articles and three mentoring awards. She has written on cross-national feminist activism, and her current project addresses issues of movement activism, incarceration and citizenship in the U.S. Her teaching interests bridge comparative and American politics and the politics of incarceration.

Katzenstein will retire at the end of this academic year. But Uday Mehta, CUNY political scientist, said Katzenstein is not really retiring, because “it is impossible to retire from a life lived with scrupulous integrity, unstinting generosity and a brilliant mind that takes its cue from an ethical compass.”