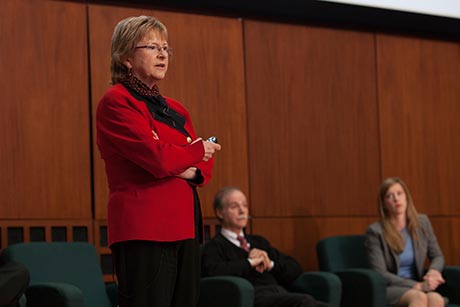 A man wrongfully convicted of raping and murdering a 9-year-old girl is sentenced to death and imprisoned in Maryland for nine years before DNA samples exonerate him.

A woman is one of six people accused of the rape and murder of a 68-year-old woman. She is interrogated multiple times; a psychologist tells her that if she would only relax, the memories of her participation in the crime would come back to her; she pleads guilty to murder.

“We are all too human. …The conduct of the law and the conduct of protection can be … imperfect,” said David Dunning, professor of psychology, opening the Charter Day Weekend panel discussion “Convicted by Law: Acquitted by Social Science” April 25. At Cornell, he said, individuals have come together to study the intersections of behavioral science and law that have a bearing on whether a person is found guilty or innocent.

The first presenter, Kirk Bloodsworth – who was the first person to have his death row conviction overturned by DNA evidence – was arrested Aug. 9, 1984, for murder. Two eyewitnesses, both young boys, described a suspect who was tall and skinny, with curly blonde hair; Bloodsworth was stocky and had bright red hair.

Bloodsworth’s trial lasted two weeks, and his sentencing was greeted with applause. When DNA testing became available, Bloodsworth asked that the physical evidence be tested. The DNA evidence linked another man to the crime, and Bloodsworth was released in June 1993. “You must stand up for what you believe in,” he said.

Amelia Hritz, a Cornell graduate student in the dual J.D./Ph.D. program in developmental psychology and law, has focused her research on false confessions. She introduced the video of an interview with a woman who confessed to murdering another woman in Nebraska. The defendant was sentenced to life imprisonment and served 19 years before she was exonerated and released.

The next three presenters, faculty members at the Cornell Law School or College of Human Ecology’s Department of Human Development who are part of the joint program, explored research on wrongful convictions.

The most accurate convictions come when juries are composed of people from diverse backgrounds, bringing in multiple perspectives, and when they engage in robust, vigorous debate, Hans said. “In most cases, juries reach defensible verdicts supported by the evidence and with which legal experts agree,” she said.

Stephen Ceci, the Helen Carr Professor of Developmental Psychology in the College of Human Ecology, has researched how children’s recollections can be influenced by interrogation techniques. Adults can taint children’s recollections by how they ask questions – appealing to false stereotypes and exploiting suggestibility, for instance. Open-ended questions and questions that ask if the child actually saw a certain behavior or is “really sure” that something happened elicit more accurate answers, his research shows.

Hans said Cornell research has discovered ways to improve identification procedures and police interrogations but, “we must educate our juries and lawyers about the potential pitfalls in some of the evidence they hear in the courtroom so they can use it judiciously. … Our program here at Cornell will continue our research and commitment to addressing the problem of wrongful conviction.”