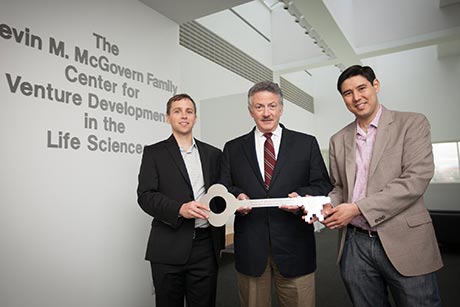 By all rights, the April 17 ceremony – welcoming startup company Repairogen to Cornell’s incubator for life sciences, the Kevin M. McGovern Family Center for Venture Development – should have been outdoors, in the full glare of the skin-damaging sun.

What better way to express confidence that the “cosmeceutical” cream, which Repairogen plans to market, really can reverse DNA damage after UV exposure (and even prevent skin cancer)?

One problem with that sunlit venue: Repairogen is months away from marketing its unique product. No souvenir jars of emollient were passed around – just a giant key that, McGovern Center Director Louis Walcer explained, unlocks not only Repairogen’s new office on the fourth floor of Weill Hall, but all the resources for incubator startups on Cornell’s Ithaca campus.

“That’s the whole idea,” said Walcer. “The McGovern Center takes in potentially great companies in their infancy, helps them develop their management teams and refine their business plans, and helps them secure additional financing as they bring their product through full development to the marketplace. Upon graduation from the center, they should be making a healthy profit, employing lots of people around the state and paying taxes – like a mature company should.”

In-vitro tests, Boice reported, “have demonstrated that we can greatly reduce DNA damage in the skin, which is the cause of premature aging and a whole host of diseases that have a deleterious impact on skin health. The inventor of our technology discovered that more than 90 percent of mice did not express CUL4A Ubiquitin Ligase in skin cells – even following repeated DNA damaging UV exposure – and mice did not develop skin cancer. This work was the initial proof that we have a powerful technology to be commercialized.”

“But we can’t claim skin-cancer prevention in our labeling or advertising,” said Frank Borchetta, the lawyer who is president and general counsel of Repairogen and a company co-founder. “Not until we complete clinical safety and efficacy studies in humans – and get regulatory approval from the Food and Drug Administration to market a pharmaceutical – can we say the ‘C word.’ Until then, we’re going to be selling a cosmeceutical, a cosmetic product with ingredients that provide the benefit of healthy younger looking skin.”

All those clinical and efficacy studies to gain FDA approval are costly and prolonged, according to Walcer, and that’s the reasoning behind Repairogen’s two-stage business plan: “They will sell the cosmeceutical with the science-backed claim – ‘enhances natural cellular DNA-repair mechanisms.’ That should make the company enough money to cover the costs of human trials and regulatory process. Only then would they be able to legally market a pharmaceutical that prevents skin cancer.”

The inventor of the CUL4A Ubiquitin Ligase inhibitors technology is Pengbo Zhou, professor of pathology and laboratory medicine at Weill Cornell Medical College. U.S. and international patents are owned and managed by the Center for Technology Licensing at Cornell University, which licenses the technology to Repairogen. The startup is getting venture capital and other support from at least six sources.

Truth in advertising, there was one other reason for the indoor venue at the McGovern Center ceremony: No on-campus sunshine at 2 p.m. last Friday.

Then – as Walcer led Repairogen co-founders Borchetta and Boice across campus to get their Cornell email addresses and ID cards – the clouds parted.