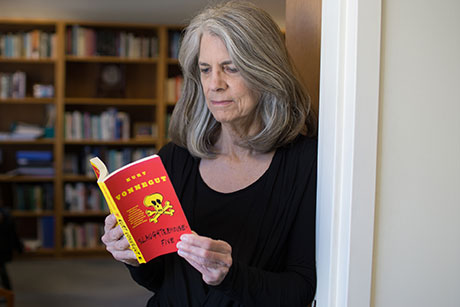 Kurt Vonnegut Jr.’s “Slaughterhouse-Five” is the 2015 selection for the New Student Reading Project at Cornell, Senior Vice Provost for Undergraduate Education Laura Brown announced this week. All students in the Class of 2019 and new transfer students will receive a copy of the novel when they arrive on campus in August.

Written in Vonnegut’s signature conversational style, “Slaughterhouse-Five” is considered a classic of American literature. The Cornell alum’s (Class of 1944) celebrated anti-war book is in part a fictionalized memoir of his World War II experiences – in particular, the fire bombing of Dresden by Allied forces in February 1945, while Vonnegut was a prisoner of war. Published in 1969 and subtitled “The Children’s Crusade – A Duty Dance With Death,” the book begins: “All this happened, more or less.”

Vonnegut was a chemistry major who cut his undergraduate career short when he enlisted in the Army in 1943. While at Cornell he was a columnist and editor at The Cornell Daily Sun. After the war, he worked as a journalist and began publishing short stories, gaining fame with his early novels including “Player Piano” (1952), “The Sirens of Titan” (1959) and “Cat’s Cradle” (1963). He returned to Cornell several times to lecture and to attend Sun alumni events between 1980 and his death in 2007.

“Vonnegut’s eminence, his reflections on the ideals and challenges of a generation, and his Cornell roots make ‘Slaughterhouse-Five’ an exceptional selection for our reading project this coming year,” Brown said.

Copies of the book will be distributed to all new students and to the Tompkins County Public Library for a community read.

Resident advisers and orientation leaders will be asked to read the book over the summer, and their training will incorporate group discussions as part of the project. These student leaders will participate in related fall semester programming being planned for new students at the Carol Tatkon Center and in North Campus residence halls.

The Tatkon Center will host small group discussions of the book with faculty, staff and students; and “we are hoping to use the Tatkon Center exhibit space to highlight Kurt Vonnegut, Vonnegut and Cornell, and/or ‘Slaughterhouse-Five,’” said Lindsay Hansen, assistant dean of students in the Office of Residential and New Student Programs.

“Our office believes that thriving academically and intellectually in this community ought to include an exploration of ideas and topics outside of one’s assigned school work,” Hansen said. “Extending programming related to the reading project into new students’ first semester on campus will provide this important opportunity.”

“Slaughterhouse-Five” is the 15th selection for the annual New Student Reading Project, which provides a common intellectual experience for new students and engages them with the academic life of the university.

Previous readings have included “The Great Gatsby,” “Frankenstein,” “The Grapes of Wrath,” “Do Androids Dream of Electric Sheep?” and the nonfiction books “Guns, Germs and Steel” and “Lincoln at Gettysburg.” Titles are suggested each year by students, faculty and community members, and chosen by a committee of faculty and administrators.