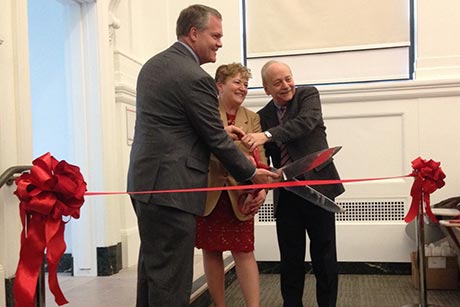 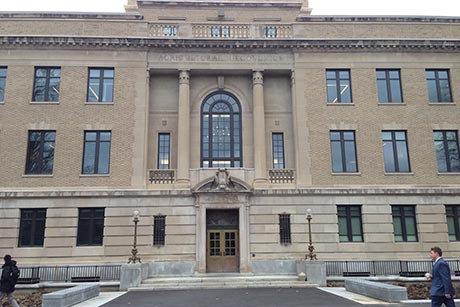 Provided
The facade of Warren Hall.

The event – coming as Cornell University begins its sesquicentennial Charter Day Weekend festival – marks the culmination of a four-year, $51 million project that College of Agriculture and Life Sciences Dean Kathryn J. Boor hailed as a triumph of good partnerships, careful planning and goodwill.

“The renovation was paid for by the SUNY Construction Fund, and I would like to thank the State University of New York and all of our associated stakeholders who made this funding possible,” Boor said. “I would also like to thank the faculty, staff and students who work in Warren Hall and who met the logistical challenges … with cooperation and calm grace.”

With almost 200 guests filling the new Nolan Auditorium, Boor recognized trustees, former deans, emeriti faculty, supporters and alumni – including natural resources graduate the Hon. Robert Sopuck, M.S. ’75, a sitting member of the Canadian Parliament. Boor also noted that the 83-year-old building – one of the most heavily trafficked classroom spaces on campus – meets LEED Gold sustainability standards. Classrooms and common spaces offer a full menu of digital support tools. All this was done, she added, while preserving the character of the building’s Beaux Arts design.

“Warren Hall embodies the spirit of interdisciplinary learning, discovery and engagement that defines CALS,” Boor said. “And now it also embodies the college’s spirit of sustainability.”

Inheriting the bulk of this new university asset are the Charles H. Dyson School of Applied Economics and Management and the Department of Development Sociology. Leaders from both marked their return home.

“After three years in the wilderness, we’ve returned to this beautiful building,” said Professor David Brown, past chair of Development Sociology. He noted that he’ll miss being known as the “mayor of the mods” – a reference to the temporary modular buildings that Brown said he and his colleagues loved because they kept the department in a common home while Warren Hall was renovated. Brown also applauded the project for expanding the department’s teaching and outreach ability through “state-of-the-art classrooms” and “cutting-edge information technologies,” and for keeping future scholars in mind.

“I’m really impressed with how much these students use these collaborative spaces,” Brown said. “It was very thoughtful to build it into the design.”

Professor Christopher Barrett, chair of the Dyson School, praised the new Warren Hall as “utterly state of the art,” and said the modern-day makeover is right in line with the sentiments his Agricultural Economics predecessor uttered when the building’s cornerstone was set in 1932.

“George Warren is reported to have told the assembled crowd … ‘I hope that as the years go by, the contributions through discovery of new truth and through teaching and public service may be as great per square foot of floor space in the new building as they have been in the old ones,’” Barrett said, adding: “We hope, too, that the impact per square foot will be as great going forward.”

Warren Hall's renovation blends the old with the new