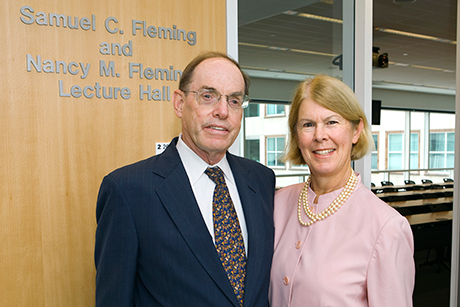 University Photography
Sam and Nancy Fleming, outside the lecture hall bearing their names.

In March, Trustee Emeritus Sam Fleming ’62 and his wife, Nancy Fleming, made a $5 million gift to create new graduate fellowships in the School of Chemical and Biomolecular Engineering. Of this latest gift from a couple who has long supported Cornell, Lynden Archer, the William C. Hooey Director of the school, says, “The timing couldn’t have been better.”

Good timing is a recurring theme for Sam Fleming. When he was a high school junior in Wilmington, Delaware, Fleming’s chemistry teacher invited him to visit Cornell for a weekend trip sponsored by Walter Carpenter, the DuPont executive for whom Carpenter Hall and several professorships are named. “Once I’d seen Cornell,” Fleming remembers, “that was the only place for me.”

When he graduated from Cornell with a five-year bachelor’s degree in chemical engineering in 1963, Fleming realized his field that was about to explode and change the face of a thousand industries.

“I had majored in polymer science, the hottest thing you could imagine,” Fleming explains. “Instantaneously I saw how one part of the world was going to change radically over a 10-year period. Think of cars. At that time, there were almost no plastics used in building a car. What immediately came to pass is that everybody trying to make a cheaper car looked to plastics.”

Luckier still was the fact that Fleming worked at a major consulting firm that had a big business telling clients what was going to be happening three years in the future. Fleming thought to himself, why not 10 years?

Fleming went on to found a new division in Arthur D. Little Consulting to provide clients with information and predictions for the chemical industry 10 years in the future. It was an almost instant success. In 1989, he led a buy-out of Arthur D. Little Decision Resources to form Decision Resources Inc., where he served as chairman and chief executive officer through 2003.

He immediately expanded Decision Resources to encompass not only chemical engineering, but biomolecular engineering consulting, too.

“Sam was well ahead of his time,” says Archer, “to understand the potential of biomolecular engineering when most of our field had their attention elsewhere – on materials, on petrochemicals.”

Sharing an example of the cutting-edge work that will be supported by the Flemings’ gift, Archer cites professor Matt DeLisa’s lab: “The DeLisa group has a vision of engineering bacteria such as E. coli to make properly glycosylated proteins for human therapeutics in a scalable, cost-effective process. Success ultimately will provide new, even novel routes toward lower-cost therapeutics.”

The Fleming fellowships, which will be awarded to four graduate students per year, will help attract highly qualified students to groups like DeLisa’s.

“Sam visited our department about nine months ago and met with faculty and graduate students working in biomolecular engineering,” Archer reports. “By showing that he can trace with a bright line his phenomenal successes in the private sector right back to the principles he studied, and habits he developed, decades ago as a student of chemical engineering at Cornell, Sam provides a reminder to all of us that we are truly educating engineers for careerlong success and lifelong impacts.”

Nancy Fleming also had a long and successful career, running her own design firm. She and Sam were high school classmates and friends, and her family had strong ties to Cornell. While Sam was studying at Cornell, Nancy earned her degree at Mount Holyoke College and a second degree in the Radcliffe Graduate Program in Landscape Design. She is the author of two books.

Emily Sanders Hopkins is a writer for the Division of Alumni Affairs and Development.