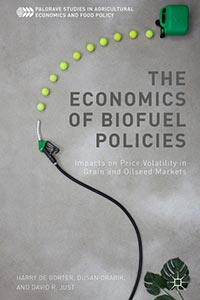 Since their inception in 2006, biofuel policies have created turmoil in the world grains and oilseeds markets and made a more profound impact on society than any other topic in food policy and agricultural economics, according to a new book.

In “The Economics of Biofuel Policies: Impacts on Price Volatility in Grain and Oilseed Markets” (Palgrave Macmillan), Harry de Gorter, professor in the Dyson School of Applied Economics and Management, teamed with Cornell colleague David R. Just and Dusan Drabik of Wageningen University in the Netherlands to show how biofuel policies create a link between crop and biofuel prices, affecting agricultural producers and consumers worldwide.

U.S. biofuel mandates require a percentage of gasoline consumed in the U.S. to contain ethanol. Since ethanol prices are dependent on crude oil and gas prices, the book shows how oil and food prices have become increasingly intertwined. As the prices of gasoline and crude oil rise, prices of world grains and oilseeds markets follow.

In this way biofuel policies coupled with tax credits essentially create a floor of how low the price of corn can go. Crops such as soybeans and wheat, whose prices follow closely because of substitution in demand and competition for land, also are impacted.

de Gorter finds that 80 percent of price increases of grain since 2007-08 are due to biofuel policies, thereby having a huge impact on value-added agricultural producers and food consumers worldwide.

Most economists argue that these price increases are a result of a “perfect storm” of supply shortfalls and demand shocks. The authors argue that this is not the case, “but rather due to biofuel policies and price links,” said de Gorter.

The empirical results also show that biofuel policies generate another $1 billion per day subsidy from crop producers to consumers, in addition to the $1 billion a day farm subsidy that was the key contentious issue in the World Trade Organization’s Doha Round trade negotiations.

The book notes that understanding the intricacies and implications of biofuel policies is important because they are increasingly related to agricultural and food policy, including environmental debates about climate change, food price riots, agricultural commodity consumer behavior issues, public health issues and international trade.