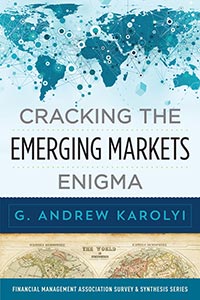 In his new book, “Cracking the Emerging Markets Enigma,” Andrew Karolyi, Cornell professor of finance, takes a first-of-its-kind look at the fundamental risks associated in investing in what are called “emerging” foreign markets.

Karolyi has been studying the publicly available data of interest to the asset management industry for decades and teaching a related course for seven years. His book – just published by Oxford University Press – should interest retail investors as well. The Samuel Curtis Johnson Graduate School of Management professor took his work a step further by devising a scoring system that ranks countries on each dimension of risk.

Karolyi shared his findings with reporters in New York City on April 30 at the Cornell ILR Conference Center.

In one example detailed, Karolyi described how he found Pakistan, Russia and Nigeria twice as risky to invest in compared to Morocco and Saudi Arabia.

Karolyi's system evaluates multiple dimensions of the potential risks faced by prospective investors. These categories of risk reflect the uneven quality of the various institutions designed to assure integrity in capital markets.

After compressing financial data on 57 countries, a total of 33 “emerging markets” were ranked based on indicators of risk such as political stability, corporate opacity and legal limits placed on foreign investors. All of the countries “are externally dependent on outside capital,’’ Karolyi said.

While using the most up-to-date market data available, Karolyi said, “My goal is to update this regularly with armies of research assistants.”

“This is a much broader, comprehensive perspective in scoring these countries,’’ Karolyi said. “Everything in this book is ‘hands above the table’ … unlike those who have a commercial interest.”

Karolyi’s book also features case studies of corporations and investors that have worked in emerging markets. “I have nothing to sell here other than books. I want this transparency,’’ Karolyi said.

Karolyi is executive editor of the Review of Financial Studies and was recently named one of the World’s Most Influential Scientific Minds: 2014 by Thomson Reuters.