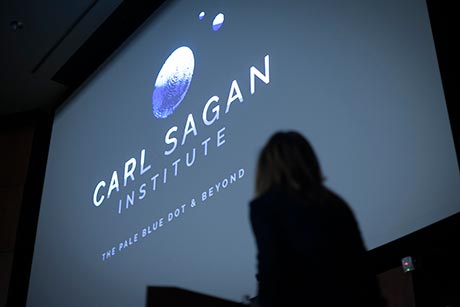 Jason Koski/University Photography
Emmy and Peabody award-winning writer/producer Ann Druyan announces May 9 that the Institute for Pale Blue Dots has officially been renamed the Carl Sagan Institute: Pale Blue Dot and Beyond. 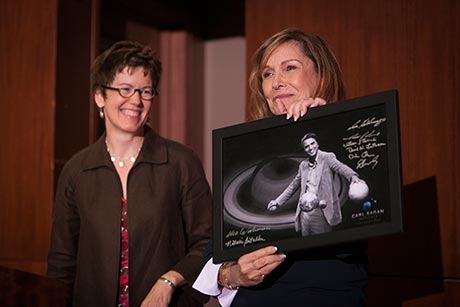 Jason Koski/University Photography
Ann Druyan holds a framed photo of Carl Sagan at the ceremony as Gretchen Ritter, the Harold Tanner Dean of the College of Arts and Sciences, looks on.
Design: Christo Downs/Popular Forces LA Animation: Arsenal FX
This animated logo was unveiled at the inauguration.

Carl Sagan longed to explore other worlds, to learn if they, too, contain life. A research institution devoted to the pursuit of this challenge, the Carl Sagan Institute: Pale Blue Dot and Beyond, was unveiled May 9 at Cornell University, Sagan’s teaching and research home for most of his career. The inauguration event, “(un)Discovered Worlds,” featured a day of public talks given by leading scientists and renowned astronomy pioneers.

The Carl Sagan Institute (founded in 2014 as the Institute for Pale Blue Dots) is embedded in a rich environment of interdisciplinary cooperation at Cornell, bringing together astrophysicists, engineers, geologists, biologists and Earth scientists to find the fingerprints of life in the cosmos. The institute’s team members have wide-ranging backgrounds in both science and engineering. Their research focuses on other planets as well as our own; their collective experience includes numerous space missions, including Viking, Voyager, Rosetta and Cassini.

Emmy and Peabody award-winning writer/producer Ann Druyan announced the institute’s name at the May 9 inauguration event. Sagan and Druyan collaborated on numerous books, articles and speeches during their 20 years together; they co-created and produced the motion picture “Contact.” Druyan was co-writer of the original “Cosmos” TV series starring her late husband, as well as lead executive producer, co-writer and a director of “Cosmos: A Spacetime Odyssey.” She served as creative director of NASA’s legendary Voyager Interstellar Message Project, which Sagan chaired, and as program director on humanity’s first two solar sailing spacecraft missions.

“There’s a meta quality to this day,” Druyan said. “Honoring Carl by empowering interdisciplinary scientists to search for the answers to his most passionate scientific questioning, seeking to share that understanding with the public, and finding in that knowledge applications to life-threatening dangers here on Earth – that’s a multi-leveled and highly accurate reflection of who Carl was. That this new institute’s home is where he chose to work and live adds yet another meaningful dimension. From the moment I first met astrophysicist Lisa Kaltenegger, the Carl Sagan Institute’s founding director, I recognized one of Carl’s kindred. It’s thanks to her that his legacy is being given such vibrant expression here at Cornell.”

“We are grateful to have the opportunity to honor Professor Sagan’s legacy at Cornell through this new institute,” said Cornell President David Skorton. “Cornellians have been searching the sky with telescopes for generations, and it’s exciting to see that same passion and promise reflected in the scientists now searching the universe for exoplanets and extraterrestrial life.”

“Are we alone in the universe? And how different or similar are other worlds to our own? These questions fascinated such inspirational pioneers as Carl Sagan, and for the first time in history, we have the technology to find out,” said Kaltenegger. “We’re truly standing on the shoulders of giants, especially here at Cornell, where Carl Sagan was looking at our own ‘pale blue dot’ to identify signs of life we can look for on other worlds.”

The institute hosts the newly created Color Catalog, a database containing color signatures of more than 100 different biota that for the first time give scientists a way to identify a wide range of signatures of life on other worlds. Researchers at the institute also have identified new targets in the search for potentially life-bearing worlds and are investigating the effects of UV radiation on their surfaces in connection with the origins of life, among a wide range of other topics.

This important research not only looks for other worlds like ours, it helps us understand and safeguard our own pale blue dot better,” said Kaltenegger. “Finding other, older worlds can also give us a first glimpse into our potential future. This is an exciting time, with the next generation of telescopes that can detect such worlds soon to be available, and the interdisciplinary team here at the Carl Sagan Institute exploring the essential questions in this search, together.”