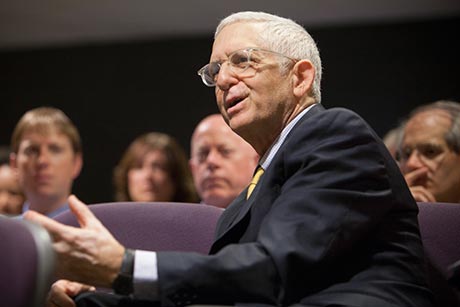 Whether it’s creating collaborative spaces to foster innovation and creativity, increasing giving to the United Way campaign, or providing resources to those with chronic illnesses, leadership is about “getting things done,” this year’s Leading Cornell class learned.

A program for staff with potential for advancing to leadership roles, Leading Cornell was taught by Samuel Bacharach, the ILR School’s McKelvey-Grant Professor in the Department of Organizational Behavior, and Yael Bacharach, an executive coaching specialist. Both are co-founders of the Bacharach Leadership Group (BLG), the organization that developed the program and has now delivered it for the third time at Cornell.

“This is an intensive, action- and results-oriented program for Cornell’s high potential employees, teaching them a set of integrated leadership ‘micro-skills,’ increasing their organizational competence, and helping them better engage their teams and move their agendas,” Samuel Bacharach said.

The course’s success lies in its practical applications of these skills, he said. “You can’t rely on old leadership skills in today’s complex work environment. We have to teach new competencies. Leadership is about getting things done.”

He noted that “the reputation of this program has really spread,” and he now teaches an equivalent course at other organizations.

The team that focused on creating collaborative spaces interviewed students and recorded their suggestions on video. Most recommended spaces that would allow them to study and socialize.

The spaces would need to be comfortable, well-lit, flexible in design and layout, and have ready access to snacks and beverages. The team created a marketing and communication plan and mapped underutilized spaces that could be transformed according to the recommendations.

Another team noticed that though Cornell offers many campus support services, most people with chronic conditions either don’t know of them or don’t think the services apply to them. This was especially true for people with conditions that aren’t readily apparent, such as Crohn’s disease, or depression. The team recommended an awareness campaign; enhanced supervisory training; one-to-one mentoring; and the implementation of universal designs.

The team that focused on engagement looked to increase giving to the annual United Way of Tompkins County Campaign. They administered a survey, conducted interviews and researched best practices. Participation at Cornell falls below that of many peer institutions and, at 13 percent in 2014, it falls below Cornell’s participation in past years.

Some reasons they uncovered for lack of participation included concerns that contributions would go to overhead (they don’t) or that donations could only be designated to Tompkins County (donors can designate to other counties). Many donors had received assistance from, or had given directly to, one or more of the 40 member agencies that the United Way helps support, without knowing their connection to the United Way.

The team recommended enhancing the United Way communications and website, implementing online pledging, and increasing participation within units through contests, competitions and incentives.

“I’ve always valued concrete outcomes, and I’ve seen through this course how coalition-building and negotiation can be key tools a leader can use to get things to happen,” said Diane Kubarek, senior director of communications for the Division of Student and Academic Services.

One of the highlights of the class, she said, was a presentation Steven Squyres, the James A. Weeks Professor of Physical Sciences and scientific principal investigator of NASA’s Mars Exploration Rover mission, gave on leading the team that sent rovers to Mars.

Peter Paradise, assistant dean for capital projects and facilities services in the  College of Agriculture and Life Sciences, said the course was practical and pertinent to the challenges Cornell has recently faced. “It helped show how to lead in a complex work environment,” he said, highlighting “the opportunity to fully engage, explore and put into practice the leadership learnings as a team and to widen our networks.”