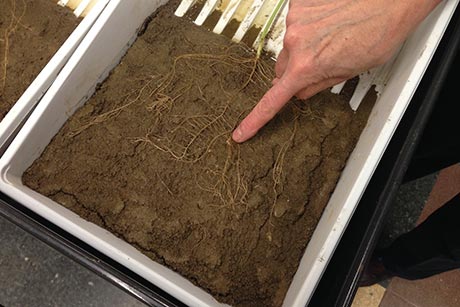 John Carberry
Senior research associate Julie Lauren points to "nodules" on legume roots during "Dig It?" a celebration of soil hosted by faculty and researchers from Soil and Crop Sciences April 29 at Mann Library. 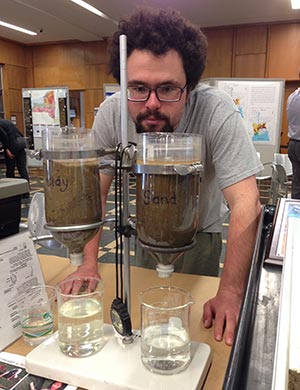 We walk on it, we eat from it, we draw our water through it, and we send our waste into its depths to return clean once more.

But what do we really know about soil?

Faculty and graduate researchers from Cornell’s Soil and Crop Sciences section took over the first floor lobby of Mann Library April 29 to spread the dirt on the power – and vulnerability – of that thin terrestrial layer upon which all land-borne life depends.

“We’re just trying to showcase cool things about soil, and the services it provides for us,” said graduate researcher Rachel Hestrin, fresh from showing some of the essential oddities of soil microbes to a group of fascinated undergraduates.

Microbes were just part of the daylong display, built on the United Nations’ 2015 theme, “International Year of the Soils.” U.N. officials said its goals were to raise awareness about the importance of soil for human life, educate the public about the crucial role soil plays in food security and promote investment in sustainable soil management activities. Officials also called for stepped-up collection of scientific data and monitoring of soil health around the globe.

Researchers from Cornell’s Soil and Crop Sciences section are leading that final charge. In addition to displaying petri plates that show microbes breaking down cellulose and defending their turf, Hestrin dug forearms-deep into a crate of shredded newspaper and organic waste, carefully cradling the small earthworms who were turning it all into black organic rich soil.

Fellow Ph.D. candidate Mike Schmidt demonstrated the filtration qualities of different soil types, noting that a sand-rich mixture excels at removing suspended particles from murky water – the process relied upon by almost every septic system and municipal waste treatment plant in the U.S.

Next to Schmidt’s steadily dripping display, senior research associate Julie Lauren displayed plant-bacteria symbiosis and the unintended effects human intervention can have on those beneficial relationships. In one tray, a small bean plant showed a dense and unmarked root system. Next to it, another bean plant showed small clusters of round peppercorn-sized “nodules” on its roots – a sign of good things in the soil.

“That’s actually a symbiotic association,” Lauren said, adding the plant will grow root hairs to curl around and house nitrogen-fixing bacteria. The tiny tenants create usable nitrogen from the air and in turn the plant offers carbon and carbohydrates. When fertilizer nitrogen is added to the soil, leguminous plants don’t have the need, the bacteria can’t find hosts and the nitrogen-fixing cycle is suppressed.

“The need is what’s attracting the microorganisms to it,” Lauren said.

Pulling a tube of “Miami Silt Loam” from a display case of two dozen samples, soil biogeochemist Carmen Enid Martinez explained the physical, chemical and organic processes that turn bedrock into topsoil. That tube also is important, Martinez said, because it shows what this process can do to potassium-rich illite (a mineral molecule modeled on a nearby table), creating the rich agricultural soils upon which farmers and gardeners in much of Pennsylvania and New York depend. Martinez said the potential variety of soils is almost endless.

“It depends on the bedrock, and the process, and it can form this profile or that profile,” she said.

College of Agriculture and Life Sciences Dean Kathryn Boor listened to Martinez marvel at the diversity of soil and thanked everyone for putting on an excellent and essential display.

“We’re nowhere without healthy soil,” she said. “I do think that we sometimes take soil for granted, so I’m grateful to our students, staff and faculty who are willing to spend their time to help people understand.”

John Carberry is managing editor of the College of Agriculture and Life Sciences.