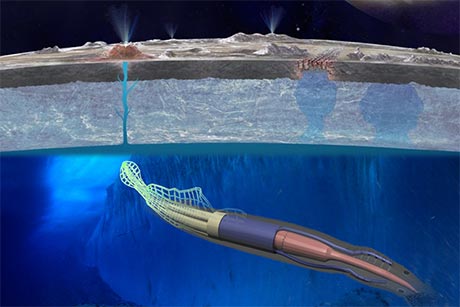 NASA/National Science Foundation
An artist's rendering depicts a soft robotic rover, resembling a squid or lamprey, that can swim though oceans. 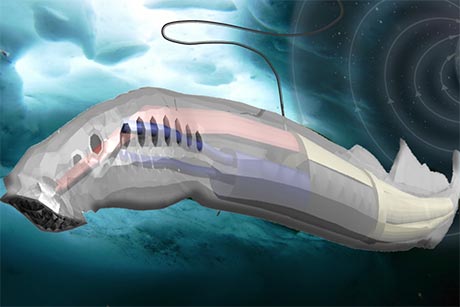 NASA/National Science Foundation
Another rendering of the lamprey-like rover.

An amphibious robot that can swim through the oceans of distant moons and planets could be the next iteration of self-sustaining, robotic space exploration.

A Cornell engineering team has received a nine-month, $100,000 starter grant from NASA to develop a soft, swimming robot suitable for exploring the harsh conditions of other worlds, notably Jupiter’s moon Europa. The grant is one of 15 awarded through NASA’s Innovative Advanced Concepts (NIAC), a program that aims to turn “science fiction into science fact” through development of pioneering technologies.

The Cornell team developing this otherworldly robot is led by Mason Peck, associate professor of mechanical and aerospace engineering, and co-principal investigator Rob Shepherd, assistant professor in the same department. The project combines Peck’s expertise in aerospace and systems engineering for space applications, with Shepherd’s research in soft machine concepts, including deformable robots, that are made with novel 3-D printing techniques and materials.

For the NIAC project, Shepherd said, “we’re proposing a soft robot that can behave like a fish, specifically a lamprey.” With tentacle-like structures that serve as electrodynamic tethers, the robot would harvest power from the existing strong electromagnetic field of Europa or whatever planetary object they were exploring. Europa is a gas-giant moon covered with liquid lakes and oceans. It’s suspected to have a subsurface ocean, which could possibly serve as a habitat for life.

“This robotic concept is inspired by terrestrial biology, and may help us understand how creatures in an environment like Europa’s ocean could gather energy to sustain life,” Peck said.

The robot would be powered exclusively by resources already in abundance around it, circumventing traditional solar or nuclear power systems. Rather than sending all its fuel from Earth, the robot would scavenge electrical energy by electrolyzing water. A mixture of hydrogen and oxygen gas would be stored internally in the body and limbs, where a spark would ignite the gas as it expands internal chambers. This inflation and deflation motion would propel the robot.

Furthermore, the robot would be outfitted with a stretchable, electroluminescent skin for illuminating the local marine environment, to enable underwater imaging, according to the proposal.

If the concept succeeds, the project may be eligible for phase II NIAC funding of about $500,000.