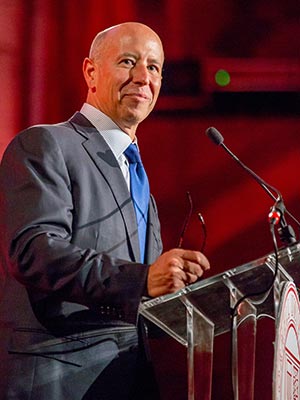 "The Cornell Hospitality Icon & Innovator Awards is a celebration of leaders in hospitality, business and philanthropy, and – equally as important – it is a fundraiser for SHA scholarships. This year we had the opportunity to honor two visionaries while raising support for future generations of industry pioneers," said Michael D. Johnson, the Bradley H. Stone Dean and the E.M. Statler Professor at the School of Hotel Administration.

Sternlicht, who founded Starwood Hotels and Resorts Worldwide in 1995 and served as chairman and CEO until 2005, received the 2015 Cornell Icon of the Industry Award for his contributions to the hospitality industry, real estate markets and the global business community, as well his philanthropy. During his tenure, Sternlicht created W Hotels and built St. Regis into a globally recognized name.

He also is chairman and CEO of Starwood Capital Group, a private investment firm he formed in 1991 that is focused on global real estate, hotel management, oil and gas, energy infrastructure and securities trading. The firm manages approximately $38 billion of assets on behalf of high net worth and institutional partners.

An avid supporter of science, education and the arts, Sternlicht has long supported diabetes and stem cell research. He chairs the board of the Robin Hood Foundation, which aims to alleviate poverty in New York City.

Mogavero, CEO and founder of Avero Inc., received the 2015 Cornell Hospitality Innovator Award. He is a restaurant CFO-turned-entrepreneur who recognized the restaurant industry’s need for a tool to help owners and managers run their operations more efficiently. Avero launched in 1999 to provide simple-to-use software that empowers food and beverage operators to make faster and more profitable decisions. Avero is the leading restaurant software-as-a-service provider for restaurants, hotels and casinos; it is used in more than 5,500 restaurants and 47 countries.

A passionate oenophile and coffee fanatic, Mogavero passed the WSET Level 3 Advanced Certificate in Wine and Spirits with distinction in 2008 and is studying for his Barista certification.

He recently visited the Cornell campus to speak to the Class of 2017 as a part of the Dean’s Distinguished Lecture Series at the School of Hotel Administration. He supports nonprofit associations including the Epicurean Charitable Foundation, the Careers through Culinary Arts Program and Share Our Strength, among others.

Since 2009, Icon and Innovator Awards galas have raised more than $6 million, with proceeds going to the SHA Annual Fund, which supports scholarships and programs.