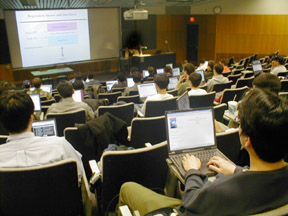 Assignments in CS 502, Computing Methods for Digital Libraries, were due to be filed -- by e-mail only -- at midnight. At 11:55 p.m., a car pulled up to the curb on Tower Road, in front of the entrance to Trillium, in Kennedy Hall. The student in the car opened his laptop and fired it up, logged onto the network and turned in his assignment, with maybe a minute to spare.

The story may be apocryphal -- none of the witnesses could name the student -- but it's certainly possible, because students in CS 502, as well as COMM 440, Computer Mediated Communication: Theory and Practice, were all issued Dell laptops equipped with wireless networking cards, and Kennedy/Roberts is one of eight buildings on campus equipped with wireless transceivers linked to the campus network. The range of the base station inside Kennedy/Roberts is officially about 150 feet, but there's enough spread to allow connections from outside the building. (The base station in the Center for Theatre Arts in Collegetown spills over far enough to permit logging in from Collegetown Bagels on College Avenue.)

Once logged in, a wireless user has the same connection to the campus network as any user on an office desktop or in a computer lab.

"My hope is that Cornell will provide campuswide coverage," said William Arms, professor of computer science, who teaches CS 502.

But for now, it's a pilot project. "It's not a campus service; it's a CIT experiment," said Martyne Hallgren, assistant director of Cornell Information Technologies. "We're not encouraging access beyond the class."

Campuswide access is certainly the long-range plan, Hallgren said. But, she said, "We have to learn how to support the technology and make decisions on how to roll out a service. We're trying to be very aggressive, and it will happen sooner rather than later."

The pilot project, called "Nomad," was funded with a $300,000 grant from Intel Corp. The money bought the base stations and 150 Dell laptops equipped with Aironet wireless networking cards. Base stations have been installed in Olin Hall, Carpenter Library, Upson Hall, Kennedy Hall, Mann Library, Uris Library, Olin Library, Willard Straight Hall and the Center for Theatre Arts, forming what Hallgren calls a "campus corridor" -- although there's still a wide gap between Kennedy/Roberts and Olin Library. The base stations automatically assign addresses to linked computers, and in theory users can move from one base to another without interrupting the connection, rather like using a cell phone.

One of the main goals of the pilot project is to see how wireless networking works in an actual classroom situation. Geri Gay, associate professor of communication, has found innovative uses for the technology in COMM 440. In one class session, she divided students into two groups, meeting in two separate rooms of Kennedy Hall, and assigned them to work together via videoconferencing on a simulated "engineering project" using Legos. In other classes, she has had students conduct online discussions like those on Usenet, then evaluate their own behavior and social interaction.

Arms devotes one class a week in CS 502 to a discussion session and encourages students to log onto the Internet and search for reference materials. At midterm he had an "open laptop exam," in which students were free to look up information on the Net, the only restriction being that they couldn't e-mail one another during the exam. But mostly, he said, "What we're doing is giving the students a powerful new tool to see what they do with it."

Not everything they're doing is academic. Here and there during a lecture you can see a student logging onto Amazon.com and buying a CD, or scrolling through pictures of cars.

"Sometimes we'll be sitting there sending instant messages back and forth about the person at the front of the room," said a student in Gay's class. Pretty much a high-tech version of doodling, doing crossword puzzles and passing notes, and it isn't necessarily bad, Gay said. "You'll always have some multitasking going on," she said.

The Human-Computer Interaction Group (HCI), which Gay directs, is conducting a formal evaluation of the project and already has published one study on the use of mobile computing in libraries. Along with surveys and focus groups, the project asks each student to keep a detailed log of computer use over a five-day period. A few preliminary observations:

·Students have expressed a "compulsion" to check e-mail more frequently.

·One student mentioned how laptops have deconstructed the traditional roles of teacher and student in the classroom by giving students opportunities to provide feedback, information and technical instruction to the instructor.

·In hallways and cafeterias and outside of faculty offices, students with wireless laptop computers become the center of clusters of students wanting to see and use the computers. Does possession of a laptop computer enhance a student's status, Gay wonders. (Unfortunately, the students in the two pilot classes will have to give back their laptops after finals.)

The HCI group has written a new application, called Semaphore, for work groups using wireless networking. Among other features, it can locate other users on the wireless network and post sticky notes that are linked to the user's location.

"You keep having these things where you want to check a fact or contact somebody," he reported. "The fact that you can join the network and do these things for a minute or two is so nice. When I go to a meeting, I spend five minutes gathering stuff and printing out. Five minutes into the meeting, if I have a laptop, I can look it up right there."

And students echo the convenience value. "I can find things whenever I get an idea," one said, in response to a survey question. "Before I could only surf when I was at home or in a lab -- by that time, I've usually forgotten what I wanted to look up."

It won't be a replacement for the wired network, Hallgren said, pointing out that the speed won't be adequate for things like large graphics files, but, she said, "It's a technology that's very attractive. It's a great idea that you can take your laptop and sit under a tree on the quad on a sunny day."

There is more information on the project on the Nomad web site at http://www.nomad.cornell.edu/.