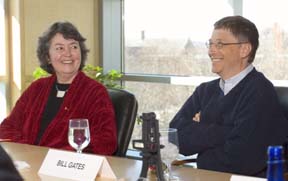 Robert Barker/University Photography
During his February 2004 visit to campus, Bill Gates meets with a panel of Cornell faculty and staff members, including Professor Geri Gay. The panel briefed him on Cornell's interdisciplinary program in computing and information science.

The Bill & Melinda Gates Foundation has awarded $25 million to Cornell University to support the construction of the signature building for a planned information campus that will bring together the several units of the university's Faculty of Computing and Information Science (CIS).

The new building, to house the Department of Computer Science and elements of the Information Science Program, will be named William H. Gates Hall. The Committee on Alumni Affairs and Development of the Cornell Board of Trustees approved the building's name at its meeting in New York City, Jan. 20.

Further additions to Cornell's information campus will provide space for computational biology, the Program of Computer Graphics and portions of the Cornell Theory Center. The School of Operations Research and Industrial Engineering of the College of Engineering also could be located there, along with elements of the Department of Statistical Science.

"The Gates Foundation's grant will have a transformative effect on our academic and research programs by bringing together faculty members who are now scattered across the campus, enhancing opportunities for creative interaction, and serving as a focus for computing education and research within the university," said Cornell President Hunter Rawlings. "It will make Cornell a model for education in the age of digital information by allowing every student, studying any subject, to understand the impact of computers on the development of that subject, and it will distinguish our graduates in every field."

Computing and information science was identified as one of the "strategic initiatives" for the university during Rawlings' first presidency, from 1995 to 2003.

"By investing in Cornell and its planned information campus, the Bill & Melinda Gates Foundation will foster the sweeping integration of computing and information science into every field of study at the university and further facilitate cross-disciplinary collaboration," said Robert Constable, dean of CIS. "The new majors and programs of study that will flourish in William H. Gates Hall will educate the next generation of those who will lead the Information Revolution -- a revolution that has contributed so much to the betterment of the human condition and the acceleration of discovery."

The foundation, best known for its work in global health, also supports a variety of initiatives in education and access to digital information. Its interest in Cornell's program began when foundation co-chair and Microsoft co-founder Bill Gates accepted former President Jeffrey Lehman's invitation to visit Cornell in February 2004. Gates' visit became part of a tour of six university campuses to bring attention to what he called a vital national need to ensure a pool of highly educated computer professionals.

In an address to a packed audience of students and faculty at Cornell, Gates emphasized the need to improve the human-computer interface, enhance information security and develop methods for handling the massive databases of scientific information being generated in fields ranging from biology to the social sciences, all areas in which Cornell is conducting significant research. He also met with faculty and learned for the first time about CIS, which was created to extend computing education across the entire campus.

This interdisciplinary approach has begun to reverse the decline in computing and information sciences enrollments and has attracted a more diverse group of students.

"We believe Cornell can be a model for integrating the benefits of computer science into a wide array of subjects and disciplines while maintaining its reputation as a stellar school for computer and information sciences education," said Sylvia Mathews, chief operating officer and executive director at the Bill & Melinda Gates Foundation. "Cornell's approach offers the potential to bridge the gap between the computer science community and the broad range of students who need computing in their work but aren't computer scientists."

Three years ago, Cornell combined its universitywide computing initiatives into the college-level CIS, promoting interdisciplinary scholarship in the university's seven undergraduate colleges and four professional schools. Currently, more than 50 faculty members throughout the university hold joint appointments in CIS and in their respective departments, which range from the physical sciences and mathematics to the arts. That number will grow, Constable said.

According to Kenneth Birman, professor of computer science and chair of the CIS building committee, the information campus project is still in the feasibility study stage. Gates Hall is estimated at 100,000 square feet and projected to cost about $50 million. Expanded construction beyond the signature building is planned, based on support from Cornell and additional donors. When completed, the information campus will be a complex of linked buildings integrated with a variety of green spaces and common spaces designed to involve students and provide opportunities for interdisciplinary collaboration.

About a dozen possible locations are being evaluated, Birman said. The proposal for the project calls for the information campus to be strategically located in proximity to the Colleges of Engineering and Arts and Sciences, the Life Sciences Technology Building and other key academic partners.

Gates Hall will house a lecture hall, faculty offices, classrooms, laboratories, student project spaces and conference rooms. The building will make innovative use of technology to foster collaboration both on and off campus, and it will include facilities specifically designed for CIS researchers whose primary offices might be elsewhere on the campus. As in Duffield Hall and the Life Sciences Technology Building, which is under construction, there will be formal and informal meeting spaces to foster "intellectual collisions" and cross-pollination.

"We are ecstatic over the Gates Foundation gift," said Charles Van Loan, the Joseph C. Ford Professor of Engineering and chair of the Department of Computer Science. "Innovative space is vital to the success of a high-ranking CS program, and the planned facility will support a style of CS teaching and research that is unique in the world. The department looks forward to sharing the new space with students and colleagues from every corner of the campus -- it doesn't get any better than that."