Conservation Fund
Forest corridors like this could connect separated habitats of endangered species to enhance their survival. Balancing the cost of the land against the best routes is a problem in computer optimization. 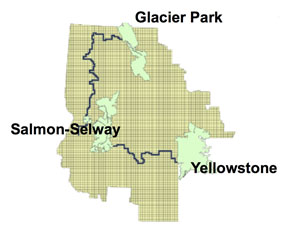 Provided
Grizzly bears live in three widely separated areas in Idaho, Wyoming and Montana. Computer optimization can balance distance and suitability against the cost of the land to design a connecting corridor, as in the example above. 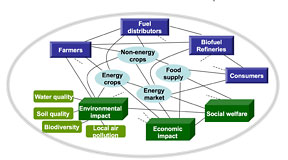 Provided
Everything we do in biofuels changes everything else. Computer models can project the results of each change into the future.

Could graph theory help a grizzly bear find a mate? Could a computer model help stabilize the tuna population? Can we compute how to transition to ethanol fuel without messing up food production?

And in the process, could grizzly bears and tuna teach computer scientists something new?

Those are some of the questions to be tackled by computer scientists, applied mathematicians, economists, biologists and environmental scientists affiliated with the new Institute for Computational Sustainability based at Cornell. The institute is being launched with a $10 million grant from the National Science Foundation (NSF), under a program designed to pursue "far-reaching research agendas that promise significant advances in the computing frontier and great benefit to society."

"Our vision is that computing and information science can -- and should -- play a key role in increasing the efficiency and effectiveness of the way we manage and allocate our natural resources," Gomes said.

Many of today's problems in ecology and conservation involve juggling large numbers of variables, often to find the optimum way to balance them. Some are so complex, the researchers say, that they will require new advances in computer science. Gomes and her team hope to create a new field of computational sustainability, analogous to computational biology, that will stimulate new developments in the computer science areas of constraint optimization, dynamical systems and machine learning. The researchers are also launching a new Journal of Computational Sustainability.

The institute will collaborate extensively with the Cornell Center for a Sustainable Future and a number of other sustainability programs on campus. But, said Gomes, "Our mission is to extend beyond the initial members of the institute, including graduate and undergraduate students in the Cornell community in other disciplines. If there is someone who has a nice computational problem about wind turbines or solar energy, for example, we want to collaborate with and help support them."

The institute already has several interdisciplinary research projects under way, including:

The interdisciplinary team working with Gomes is listed on the institute's Web site at http://www.cs.cornell.edu/gomes/computational-sustainability/.