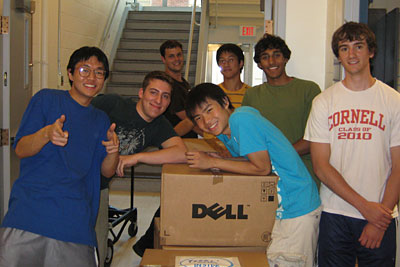 Al Heiman, a senior consultant/adviser with Cornell Information Technologies, has a mission: Collect computers from people who no longer need them and send them to people who do.

But logistics are far from easy when the people getting the computers live in places as far-flung as Liberia, Zambia, Afghanistan, South Africa and Jamaica.

Iraq is the latest front for Heiman and the student group he advises, the Cornell Computer Reuse Association (CCRA). On Nov. 18, the first installment of 25 computers from Cornell was sent to al-Anbar University's library in Ramadi.

Cornell Library is the biggest donor to the program. Heiman estimates that the library has provided more than half of the 600 computers he has shipped. Oliver Habicht, Cornell Library's director of desktop services, estimates that endowed library buildings and units turn over about 230 computer systems every year.

In 2005 Heiman spotted a pile of older, unused Dells and thought of sending them to people who needed them. He has been sending computers abroad since. Having once lived and worked as a teacher in Zambia, "I know how much Africa is crying out for help with education," he said.

The Iraq shipment marks the first time that the disused computers will be shipped with the Essential Electronic Agricultural Library, a Mann Library program that provides extensive journal databases to developing countries. The shipment includes a 500-gigabyte hard drive, installation manuals and instruction manuals in English and Arabic. "Having access to the TEEAL journals will help the students and faculty research current practices," Parment said. "Anbar Province is mainly an agrarian society… the more information they can be provided, the better the agriculture practices will be here."

"I think it's very important for helping Iraqi universities to be aware of all the latest articles," said Khalida Jaafar, an Iraqi student studying at Cornell in the Humphrey Fellowship Program, who translated the quick-start instructions into Arabic. "I'm helping my people, also, and helping Cornell to have this successful program and outreach to other countries."

Heiman also collaborated with Marine Capt. Georgia Parment, a public education planner in the U.S. military stationed in Iraq. Parment noted that the computers will be used by about 10,000 students on the Ramadi campus as well as faculty and staff of the Agriculture College, which reopened in 2007, after Coalition Forces had occupied it for 18 months.

CCRA President Benjamin Honig '10 and Heiman are now working with the University of Massachusetts to donate computers, and they now hope to recruit more schools. "Cornell isn't the only institution with extra computers," Honig said. "Right now, we're applying for tax-exempt status that would create an umbrella organization…. The more people in our network, the more computers we can receive and donate."

"This has already succeeded beyond my wildest dreams," Heiman said, "and I'd like to see it keep going."

To volunteer or donate machines, contact Heiman at arh11@cornell.edu.