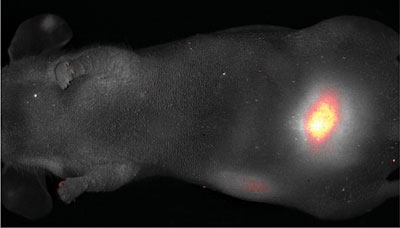 Memorial Sloan Kettering Cancer Center
C dots fluoresce brightly enough to be seen through the skin of a mouse (faintly visible in this photo). Dots coated with polyethylene glycol have all reached the bladder in 45 minutes, demonstrating that C dots will be harmlessly excreted after they do their job.

Brightly glowing nanoparticles known as "Cornell dots" are a safe, effective way to "light up" cancerous tumors so surgeons can find and remove them.

According to research at Memorial Sloan-Kettering Cancer Center (MSKCC), Cornell dots, also known as C dots, are biologically safe and stable and small enough to be easily transported across the body's structures and efficiently passed through the kidneys and out in urine.

A single dot consists of several dye molecules encased in a silica shell that can be as small as 5 nanometers in diameter (a nanometer is one-billionth of a meter, about three times the diameter of a silicon atom). The silica shell, essentially glass, is chemically inert. Coating the dots with polyethylene glycol, a process called PEGylation, further protects them from being recognized by the body as foreign substances, giving them more time to find targeted tumors.

The outside of the shell can be coated with organic molecules that will attach to such desired targets as tumor surfaces or even locations within tumors. The cluster of dye molecules in a single dot fluoresces under near-infrared light much more brightly than single dye molecules, and the fluorescence will identify malignant cells, showing a surgeon exactly what needs to be cut out and helping ensure that all malignant cells are found.

According to MSKCC researchers, the technology also can show the extent of a tumor's blood vessels, cell death, treatment response and invasive or metastatic spread to lymph nodes and distant organs.

Cornell dots were developed in 2005 by Hooisweng Ow (pronounced "Hoy-sweng-Oh"), then a graduate student working with Ulrich Wiesner, Spencer T. Olin Professor of Materials Science and Engineering at Cornell. Their refinements of the dot design and experiments in mice at MSKCC are reported in the January 2009 issue of the journal Nano Letters (Vol. 9 No. 1) by Wiesner, Dr. Michelle Bradbury, a physician-scientist specializing in molecular imaging and neuroradiology at MSKCC, and colleagues.

"Highly sensitive and specific probes and molecular imaging strategies are critical to ensure the earliest possible detection of a tumor and timely response to treatment," said Bradbury. "Our findings may now be translated to the investigation of tumor targeting and treatment in the clinic, with the goal of ultimately helping physicians to better tailor treatment to a patient's individual tumor."

Since creating the Cornell dots, Wiesner, Ow and Kenneth Wang '77 have co-founded the company Hybrid Silica Technologies to commercialize the invention. The dots, Wiesner said, also have possible applications in displays, optical computing, sensors and such microarrays as DNA chips.

The latest research was supported by the Clinical and Translation Science Center at Weill Cornell Medical College and the Cornell Nanobiotechnology Center. The original research was funded by the National Science Foundation, New York state and Phillip Morris USA.