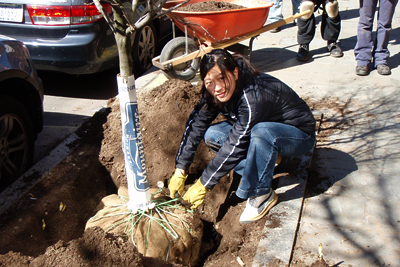 So far 315,678 trees have been planted in New York City as part of the MillionTreesNYC program, Mayor Michael Bloomberg's citywide, public-private initiative to plant one million trees in the city by 2017.

Only 694,322 to go. Cornell researchers -- with funding from the Cornell Center for a Sustainable Future (CCSF) and Cornell Civic Ecology Lab (CEL) -- are playing a major role in making it happen by working with other New York City partners to develop the research agenda for the large-scale urban forestry project.

On March 5 and 6, for example, they helped organized a research symposium at the New School that attracted more than 200 environmental scientists and practitioners. The Cornell scientists presented their work about tree survival and community participation in urban forests.

Marianne Krasny, Cornell professor and chair of natural resources and director of CEL, presented a paper that she and Keith Tidball, associate director of CEL, wrote on how environmental education can contribute to the success of the MillionTreesNYC program.

"Environmental education does not only include taking kids outside the city to a more natural area, but also can become part of civic ecology practices already taking place in the city, such as the tree planting activities of hundreds of urban stewardship groups across New York City," Krasny said. "These activities have both civic and environmental outcomes through bringing adults and youth together to focus on improving the environment of their urban neighborhoods."

Other Cornell presentations included research on growing trees surrounded by concrete, by Nina Bassuk, professor and program leader of the Urban Horticultural Institute of Cornell; civic ecology in the Bronx and how environmental restoration can go hand in hand with environmental education to influence participants' sense of place, by graduate student Alex Kudryavtsev; and the motivations behind volunteers who get involved with urban forestry and strategies to increase that involvement, presented by graduate student Christine Moskell. Moskell represented the team including Shorna Broussard Allred, associate professor of natural resources, and Gretchen Ferenz, program leader, and other extension educators from Cornell Cooperative Extension-New York City.

"The diversity of research here is fantastic," said keynote speaker Thomas Elmqvist, who leads studies on urban socio-ecological systems and globalization at the Stockholm Resilience Center, which has a growing partnership with CEL. "It's everything from epidemiology, social science, natural science and to try to understand how to link that into policy."

"Cornell is the land-grant university for New York state. Most of the state's residents live in cities, and cities are increasingly being viewed as having a critical role in the future of sustainability and climate change," said Tidball, a faculty fellow of CCSF. "Thus, to carry out our land-grant mission, we have an ethical duty to serve all New York's residents and to be engaged in New York City and MillionTreesNYC as a means of impacting sustainability and climate change."

MillionTreesNYC is part of PlaNYC and was launched by the Parks Department and New York Restoration Project in New York City, with numerous public and private partners.