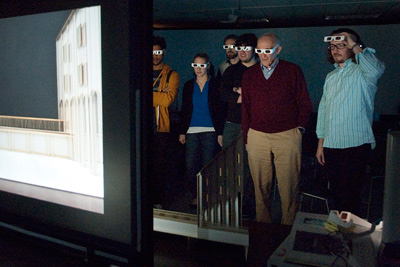 Making a 3-D movie requires more than just a camera with two lenses. It demands new ways of thinking about composition and new technology to manipulate the images, according to the man known as "Captain 3D."

Phil McNally, stereoscopic supervisor at DreamWorks Animation and arguably Hollywood's top 3-D guru, gave Cornell students a quick survey of some new kinds of visual thinking March 11, in a lecture sponsored by the Cornell Program of Computer Graphics. McNally illustrated his points with "in-depth" examples for a packed audience in the Willard Straight Theater, all wearing polarized 3-D glasses. Attendees included computer science students and students from art and architecture.

McNally so identifies with 3-D that he legally changed his name to "Phil Captain 3D McNally," according to Don Greenberg, the Jacob Gould Schurman Professor of Computer Graphics and director of the Cornell Program of Computer Graphics. Not only are more 3-D movies coming, Greenberg said in introducing McNally, but they will be dwarfed by 3-D computer games, which in turn will be dwarfed by 3-D television.

Not everyone in the industry agrees, McNally admitted. "Directors and cinematographers have spent their careers learning to look at a three-dimensional scene and imagine what it will look like flat," he explained, so some resist when told their movie is going to be made in 3-D. 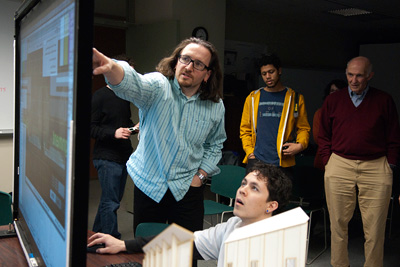 But 3-D delivers more information, McNally pointed out, comparing a series of "flat" and 3-D photos. In an image of a tree-lined park, for example, leaves that seemed to be part of distant trees suddenly jumped forward and revealed themselves to be overhanging close to the camera.

In composing a 3-D scene, McNally said, moviemakers must visualize a pyramid with its apex at the viewer's eyes and its sides extending outward to the edges of the screen and then into the space behind the screen. Action inside the pyramid takes place not only at the plane of the screen but also in front or behind. The filmmaker also must deal with how the size and shape of the pyramid will vary depending on the size of the screen and the viewer's seat. Although the space never changes for the viewer, changes in the focal length of the camera lens or the separation between the two lenses that record left- and right-eye images may, and this will affect the separation and depth the viewer sees when those images arrive in the theater.

In computer animation, where no "camera" Is used, objects and characters are created in a computer as 3-D models -- sets of x, y and z coordinates for every point on the surface of the object. The computer then "renders" the final image by calculating what that model will look like if viewed from a certain location. To get 3-D, just do that twice from two locations an eyeball-span apart.

That gives the filmmaker great control, McNally said, illustrating with scenes from the DreamWorks film "Monsters vs. Aliens." When the apparent position of the camera is close to a character in the foreground, things farther away lose separation and depth. But if the scene is adjusted to emphasize depth in the background the depth of the foreground character becomes exaggerated. So, the foreground and background are rendered separately with different separation of the "lenses," and the two images composited together. Something similar can now be done with live-action filming, he added.

McNally spent March 12 critiquing student 3-D movies in Greenberg's class, "Imaging in the Electronic Age," which is offered primarily to freshmen and sophomores.

The visit to Cornell, McNally said, was not only to advance a teaching program that may produce future employees for DreamWorks, but also to keep tabs on graphics research at Cornell.