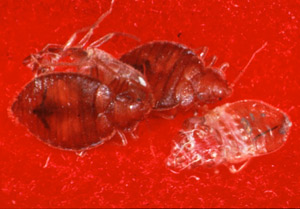 The NYS Integrated Pest Management (IPM) program has been zero-funded in the proposed New York budget. Yet IPM saves farmers millions of dollars and keeps New Yorkers safer and healthier by keeping thousands of tons of pesticide out of water and soil, says Cornell professor Don Rutz. He added that IPM also represents a massive return on investment for the state.

Meanwhile, emerging pests like bed bugs and Swede midge are poised to take off and take over.

"Our savings the first year were dramatic, unbelievable," says grower Doug Mason, who enrolled his 325 acres of sweet corn, tomatoes and potatoes in IPM nearly 30 years ago. He learned, for example, the best ways to scout for pests, cut back on pesticides and use newer "soft" pesticides that target pests while leaving other organisms unharmed.

"Last year we didn't use a single spray on our 200 acres of sweet corn because IPM's trap network showed the pests weren't there," the Wayne County grower said. Savings: about $18,000 on sprays he didn't use.

"People end up spraying stuff that doesn't even work because they don't know the preventive steps to take," She says the wrong spray could just spread bugs to other rooms or apartments. New York City's advisory council is about to release guidelines that will reverse that trend, she notes. Her leadership? Gone, if the NYS IPM Program is lost.

The Big Apple isn't alone in feeling the bite. "Bed bugs are back in every city you could name," says Peter Castronovo, senior sanitarian at the University of Rochester, noting that apartment buildings, dorms and hotels are hardest hit -- and that this is just the beginning.

"The public, pest-management industry and regulatory agencies are going to need guidance, research and education," Castronovo says. "It would be a terrible mistake to cut IPM now."

People are more likely to spray if they don't understand what makes pests tick, says Rutz, NYS IPM director and a professor of veterinary entomology at Cornell. "It doesn't matter if they're farmers, school custodians, golf course superintendents or homeowners," Rutz says.

$700,000 saved by 20 soybean growers in Jefferson, Wayne and Seneca counties after a 2009 hands-on teaching program taught them to scout for soybean aphids.

"Avoiding apple scab can save me $2 million a year," says apple grower Tre Green of Clinton County. He uses IPM's disease forecasts to stay on top of such diseases as apple scab on his 1,300 acres, spraying only if the forecasts show a strong likelihood of disease.

New York's apple crop -- 30 million bushels of apples a year -- could suffer "millions of dollars" in losses without IPM research and education, notes Deborah Breth, a fruit specialist with Cornell Cooperative Extension. Codling moths alone could cause upward of $500,000 in damage. IPM's on-farm demos show that investing an extra $150 per acre in "mating disruption" can prevent losses of $1,000 or more per acre. "By the third year growers can cut insecticide use by about 65 percent," says Breth.

On large farms, as much as $450,000 per year can be spent on sprayings. "Saving even one spray is substantial," says Gary Mahany, who farms 2,590 acres. IPM pest forecasts have helped him cut pesticide use to the tune of $68,000. "The environmental impact is far less," he says. "I want safe water too."

Grape grower Bill Dalrymple in Seneca County, who found such value in IPM's statewide disease and insect forecasts that this year he bought his own weather station and hooked them into the IPM network. "IPM has become such an important part of our program, I can't imagine losing it," he said.

Mary Woodsen is a science writer with the NYS IPM Program at Cornell.