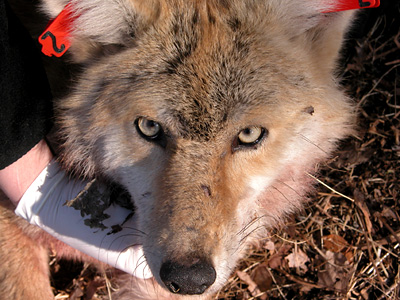 The term "concrete jungle" may be more apt than ever, as sightings of coyotes, deer, raccoons and geese are increasing in urban areas, including New York City.

Coyotes have been seen in New York before, but "it seems like there are more observations this year than in the past, though we don't know why," said Curtis, professor of natural resources, in an interview prior to the event.

Coyote pups are born in April and leave the pack usually at the beginning of January. The young animals likely travel south from Westchester County into the city along such corridors as train tracks, power lines and river edges, mainly eating injured or dead deer, Curtis said. Once in the city, they live in wooded areas.

"These young animals can travel a long way," Curtis said. Cornell researchers radio-collared 40 coyotes in Westchester County over the last four years and found three of them dead 40 to 70 miles away in Connecticut.

Coyotes can carry rabies, and during breeding season, from late January to early February, they may become more territorial and aggressive, posing a threat to small dogs and even humans.

"As coyotes habituate to people, the risk is there" for human attacks, said Curtis, citing the 2009 death of a young woman who was killed by coyotes in a Canadian national park. "Fortunately, attacks to people are a relatively rare event, but they do occur," he added.

Urban raccoons also pose a public health concern because "they are by far the top mammal vector for rabies," posing a threat to cats, dogs and other pets, said Curtis. Raccoons also cause damage to property when they get into homes and other structures.

Private landowners and communities can contract with licensed nuisance wildlife control operators, who "will trap and remove a nuisance coyote or raccoon" for a fee, said Curtis.

Numbers of Canada geese are also increasing in the New York metropolitan area, with populations jumping to more than 1 million in the Atlantic flyway, from around 400,000 in 1990, according to Curtis. Aside from being a public nuisance and polluting golf courses and parks, "one goose is enough to take down a jet engine," said Curtis, who added that all airports with jet aircraft have plans to manage birds.

The event was part of Inside Cornell, a monthly series held in New York City featuring Cornell experts. The series is produced by NYC Communications and Cornell's Press Relations Office.