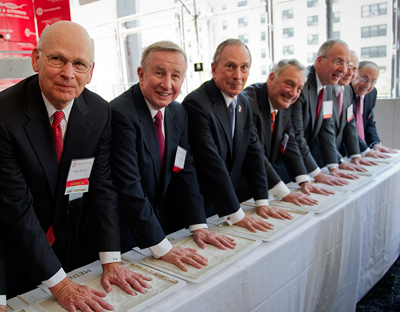 Provided
From left, Peter Meinig, chairman of the Cornell Board of Trustees; Dr. Antonio M. Gotto Jr., dean of Weill Cornell; New York City Mayor Michael Bloomberg; Sanford I. Weill, chairman of the Weill Cornell Board of Overseers; Cornell President David J. Skorton; Maurice Greenberg, member of the board of overseers; and Robert Appel, capital campaign chairman. Their handprints will be made into bronze plaques for the lobby of the new Medical Research Building.

Weill Cornell Medical College celebrated May 26 the start of construction on its new Medical Research Building, a state-of-the-art facility that will more than double the institution's existing research space. The 18-story, $650 million building is the centerpiece of Weill Cornell's $1.3 billion Discoveries That Make a Difference Campaign, the country's largest for a medical college. A total of $1 billion has been raised toward this goal in a record time of less than four years.

The 480,000-square-foot building will include 16 floors of programmed space with initiatives dedicated to translational bench-to-bedside research targeting some of the most daunting health challenges, including cancer, cardiovascular disease, children's health, neurodegenerative diseases such as Parkinson's and Alzheimer's, and global health and infectious diseases. More than $200 million will go toward recruitment of additional research faculty.

"As we celebrate the start of construction, we can be confident that we are building on a solid foundation of research successes and toward a future that will further establish Weill Cornell and New York City as one of the world's leading centers for biomedical research," said Sanford I. Weill '55, chairman of the Board of Overseers of Weill Cornell. "It is here where our physicians and scientists will be working to find the answers to the health challenges of our time, and bring hope and health to people in New York and around the globe."

Monies raised for the campaign include 93 gifts of $1 million or more, of which 33 specifically support the new building. These include $135 million provided through a challenge gift from Joan and Sanford I. Weill as part of their historic $250 million pledge in 2007 -- believed to be the single largest gift ever given to a medical school. In addition, the campaign received a $100 million gift from longtime supporters of Weill Cornell who wish to remain anonymous.

Maurice R. "Hank" Greenberg, a member of the Board of Overseers of Weill Cornell and chairman and CEO of the Starr Foundation, and his wife, Corinne, have been leading supporters of the campaign, as well. The Starr Foundation has given $75 million, in addition to $25 million from the Greenbergs for the new building.

"We are forever grateful to Joan and Sandy Weill, Corinne and Hank Greenberg, The Starr Foundation, all our fantastic donors and everyone who has helped make this project possible," said Dr. Antonio M. Gotto Jr., the Stephen and Suzanne Weiss Dean of Weill Cornell Medical College. "It will make us highly competitive ... allowing the college to recruit more than 30 additional top-tier researchers."

"This innovative facility will open numerous opportunities for sharing ideas and technologies and reduce the time it takes research to go from laboratory concept to medical treatments," said Cornell President David J. Skorton. "A model for the research enterprise in the 21st century, it promises to expand knowledge while addressing the needs of patients, their families and the communities we serve."

The groundbreaking ceremony also included remarks by the Michael Bloomberg, mayor of the New York City, and Peter C. Meinig, chairman of the Cornell Board of Trustees, among others.

Located on East 69th Street between York and First avenues, the building is scheduled to be dedicated in December 2011.

Designed by Polshek Partnership Architects, the building has open floor plans throughout to facilitate communication and collaboration among scientists. Its proximity to the Weill Greenberg Center, the medical college's ambulatory care building, will further enhance communication between investigative researchers and practicing clinicians.

The facility will not only have a wide array of sophisticated lab equipment but also will also be environmentally friendly, energy efficient and aesthetically pleasing, with a glass façade that reduces energy consumption and bathes interior areas with natural sunlight.