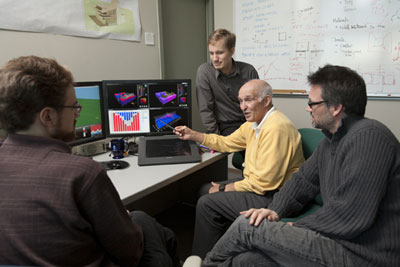 Making a building meet sustainability requirements usually involves engineers prescribing fixes -- from building orientation to ventilation systems -- long after the architects have drawn up their designs.

Supported by federal stimulus funds from the American Recovery and Reinvestment Act (ARRA), an interdisciplinary research group at Cornell is creating computer simulation software that would streamline this process, allowing architects to employ sustainable design principles from day one.

The team, which includes faculty from computer science, mechanical engineering and architecture, has received a three-year, $1.83 million grant from the Department of Energy to continue work on their project. Their 3-D simulation tool lets a building designer proactively include such information as temperature, the behavior of light and total energy use at the start of the design process. Such factors should help cut down on the expense of consultation and the labor of going back to change a building's design, said Don Greenberg, the Jacob Gould Schurman Professor of Computer Graphics (also a professor in architecture and at the Johnson School) and one of the project leaders.

The key to sustainable design is tightly coupling a building to its environment, Pratt said. For example, a well-designed building would use natural ventilation during warm weather to eliminate the use of air conditioning. The simulation tool will allow designers to immediately understand all aspects of the building environment and to cut energy use and, ultimately, the carbon footprint.

"If you're just generically designing a building, you always have the option of putting mechanical systems in and pumping it full of energy," Pratt said. "But that's not really a viable design process anymore."

The collaboration was first funded in 2008 by the Cornell Center for a Sustainable Future Academic Venture Fund. The grant allowed the researchers to create a working prototype of their software. In their next phase of research, the group plans to continue perfecting their system, as well as test it with architecture firms and on campus buildings.

Recent advances in computer graphics technology will likely accelerate these types of simulation computations by orders of magnitude in the near future, Greenberg said. The program now functions on a cloud of computers at Cornell's Program of Computer Graphics running multiple parallel simulations. In several years, said Pratt, most architecture firms will have the computing capability to run such complex models in their offices.

The group is also looking to expand their software to display the simulation results on large-scale multitouch devices, as opposed to just a standard interface. A prototype is being worked on by Lars Schumann, a member of the research team.