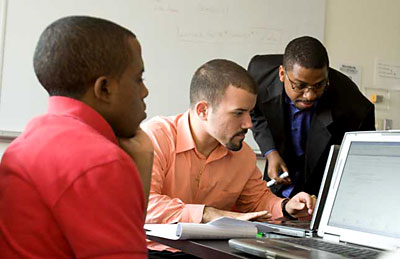 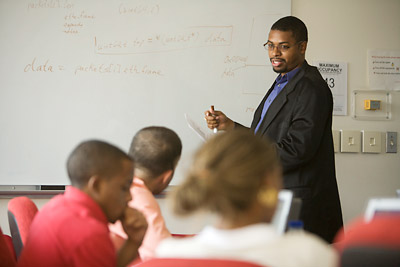 Six minority students majoring in computer science gained new insight into the Internet at a Cornell workshop that showed them how the hardware and software works beneath the surface. In the process they got a glimpse of what an academic career in computer science and engineering might be like.

The SoNIC Workshop (for SOftware defined Network InterfaCe), led by Hakim Weatherspoon, assistant professor of computer science, brought five students from Howard University and one from the University of Puerto Rico to Cornell June 12-18 for an in-depth look at Weatherspoon's research, which explores how information is encoded into packets of digital bits for transmission and how networking hardware sends and receives those packets.

His work is part of a larger Cornell effort to improve the reliability of cloud computing, where data is stored and processed in remote data centers. Cloud computing is becoming the "platform of choice," Weatherspoon said, and data centers are proliferating. "It's as easy as ordering one online and having it shipped to any location," he said.

Weatherspoon's goal is to network such data centers successfully. Fiber-optic networks stretch and squeeze bundles of information, sometimes delivering them too fast for the receiving computer to read correctly, causing errors or introducing delays when packets must be resent.

The visiting students worked with Weatherspoon's SoNIC platform, a combination of hardware and software that makes it possible to encode information in any form the researcher chooses -- not always according to standard Internet protocols -- and send the resulting messages across the country and back on the National LambdaRail scientific research network and analyze them when they return.

The workshop also included presentations on other aspects of computer networking and other fields of engineering from various faculty members. A goal of the workshop, Weatherspoon said, was to encourage the students -- mostly juniors and seniors -- to consider pursuing a Ph.D. degree and a career in research.

"The whole time we were exposing them to the technical subject we were letting them know they can pursue research careers instead of just going into industry," he explained.

Weatherspoon asked each presenter "Why did you get a Ph.D.?" His favorite answer, he reported, came from Michael Spencer, professor of electrical and computer engineering, who said it was a "spiritual decision."

Weatherspoon himself had planned to find a lucrative job at Microsoft or Intel after graduating from the University of Washington, but he reconsidered. "In an academic position," he explained, "you can have tremendous influence and impact. You can affect the national agenda."

He recruited minority students for the workshop because, he pointed out, only about 3 percent of Ph.D.s in computer science and engineers are members of underrepresented minorities. According to the 2009-10 Computing Research Association's Taulbee Survey, he noted, of the 1,481 students awarded Ph.D.s., only 17 were black, 22 Hispanic and three Native American.

He advertised the workshop heavily at Howard University, he said, but next year hopes to expand and bring in more students. Often referred to as a "historically black college and university," Howard has become one of the most highly respected engineering schools, Weatherspoon noted.

There was no cost to the students. Workshop funding was provided by the National Science Foundation and its TRUST Science and Technology Center, Cornell's Faculty of Computing and Information Science and College of Engineering, and industry partners.