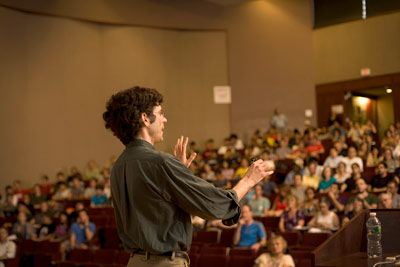 Jason Koski/University Photography
Today's online experience is really the experience of being part of a gigantic crowd of people, said Jon Kleinberg, in a lecture about what social media can teach us about ourselves.

Today's online experience is really the experience of being part of a gigantic crowd of people, said Jon Kleinberg, the Tisch University Professor of Computer Science at Cornell, in a lecture about what social media and other popular websites can teach us about ourselves, July 20 in Kennedy Hall.

When we go online, we do not just learn about an event, said Kleinberg, the winner of a MacArthur Fellowship (nicknamed the Genius Award) and best known for his research on networks. We also learn about the experiences, opinions and reactions of millions of people.

"It's like standing in a crowd where the thoughts of the crowd are being expressed, and you have to piece together a picture from all these different perspectives," Kleinberg said. "It's making the invisible become visible."

These reactions would have been quickly forgotten 20 years ago, Kleinberg said. But now, even if only a small fraction of those people upload their photos and comments, a trace is left on the Internet, a "hot spot" showing that something happened at that point in time.

When those photos are tagged with a location, the result is a map that tells us how people experience the world.

To learn from this raw data, we must look for patterns in the tagged photos, Kleinberg said. For example, people all over the world may tag their photos with the words "friends" and "trip." However, it is mainly photos taken in Paris, France, that have the tag "Eiffel Tower." "This data is rich enough that even Martians can be credible tour guides," Kleinberg said.

Using data from sites like Facebook, we can begin to map a person's social circle. "It would be nice if I could pull back from this to some kind of global map," Kleinberg said. "What does the eastern hemisphere of the world's social network look like? Unfortunately I can't do that." The reason is what some people call the "small world phenomenon."

"If I zoom out a couple steps from one person to include not just the person's friends but their friends of friends and a couple levels beyond that, I have brought in a large fraction of the entire world," Kleinberg said.

This insight comes from the Six Degrees of Separation Experiment, which showed how we are only a small number of links away from anyone else in the world. We need to think about "how the network is embedded in geography," Kleinberg said. The Six Degrees experiment worked because each person has social links that span short, medium and long distances.

Kleinberg concluded with what he believes is the significance of this research: "We have lived in social groups for a long time, but now we are learning things about them that we have never seen before."

The event was sponsored by the School of Continuing Education and Summer Sessions.