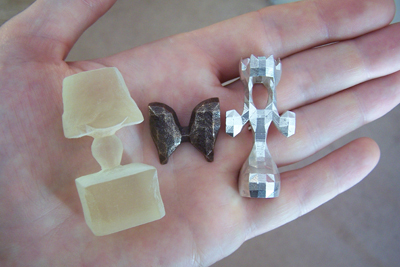 Just like generations of plants and animals evolve in nature, Cornell engineers are allowing anyone online to guide the evolution of printable, three-dimensional objects, aiming to revolutionize the design of art, architecture and even artificial intelligence.

Their new, interactive website, http://EndlessForms.com/, allows users to design their own things -- from lamps and butterflies to furniture and faces -- without any technical knowledge and using the same principles that guide evolutionary biology.

The site and algorithm were developed by Jeff Clune, Jason Yosinski and Eugene Doan in the Cornell Creative Machines lab of Hod Lipson, associate professor of mechanical and aerospace engineering and of computing and information science. The work was published in the Proceedings of the European Conference on Artificial Life and was described by Clune at that conference Aug. 11 in Paris.

"In order to evolve truly complex things, we studied how nature makes everything from oak trees to elephants," Clune said. "Once we implemented these processes on a computer, complex shapes immediately began appearing."

Clune is also researching how combining evolution with such concepts from developmental biology can improve the design of artificially intelligent robots.

EndlessForms.com allows users to breed objects just as gardeners breed roses; a "generation" of objects is displayed, and a user chooses objects they like, which are "bred" to produce the next generation. Over time, objects evolve, and users can publish these objects. Others can further evolve, share and rate them, creating a collaborative exploration of designs that, according to Lipson, represents an entirely new way of thinking about design. Users can then have their objects made by 3-D printing companies in a wide range of materials, such as silver, steel, ceramic or sandstone.

The concept eliminates the need for skilled engineers to draw in Computer-Aided Design (CAD), which is complicated and non-intuitive.

"These new design tools free people to focus on being creative, instead of being mired in the details of technical software," Lipson said.

Now that 3-D printing is taking off, the goal is to unshackle the design process, flooding the industry with objects that are truly one of a kind. Lipson likens the 3-D printing industry to iPods with no music -- the printers exist, but the availability of content is bottlenecked by the old methods like CAD that few people know how to use and that stifle creativity.

Clune is also interested in using the technology of EndlessForms.com to design soft-bodied, agile robots with complex neural networks, or digital brains. Using concepts from developmental biology on how a single fertilized cell grows into a human or a hawk, Clune is learning how to grow complex, intelligent bodies and brains for robots.

The idea came about after computer scientists developed a way to mathematically abstract how organisms develop. Clune has used this abstraction to evolve neural networks that control robots, and he has found that using such principles produces robots with coordinated, graceful behaviors that are far superior to approaches that do not include developmental biology concepts.

Finally, EndlessForms.com helps people learn about evolution, the researchers say. It demonstrates in real time the power of evolution to produce complex designs, providing a rare glimpse of the process in action. Users can also view the ancestral lineage of each object stretching back to the first, simple, randomly generated object, and thus can see how evolution builds complexity via a series of small changes.

For more information about EndlessForms.com, including high-resolution pictures of evolved and 3-D printed objects: http://EndlessForms.com/press. Contact Clune at jeffclune@cornell.edu or 517-214-1060 for additional information.

Learn more about the Cornell Creative Machines lab at http://creativemachines.cornell.edu.