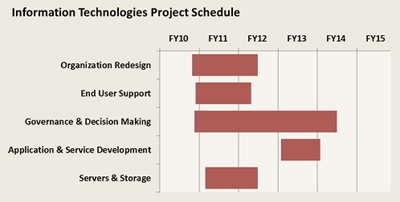 The Administrative Streamlining Program is hosting the following brown-bag lunch sessions this semester, with updates on its initiatives. More information.

Collaboration among those with a stake in Cornell's information technology (IT) is going to be the key to streamlining it successfully, said project managers speaking at an Oct. 6 forum in the Physical Sciences Building.

"CIT (Cornell Information Technologies) can't pull you into [the streamlining initiative]. We have to walk side-by-side, and that doesn't mean that we aren't going to get a bump and a bruise somewhere along the way, but we have to do it together," said Dave Vernon, director of CIT network and communications services. "If the university wants to realize the savings that it's our obligation to discover, that's what we must do."

The discussion was the third of seven brown bag lunches organized by the Administrative Streamlining Program to update the Cornell community on its cost-cutting initiatives.

The presenters offered updates on four of the IT initiative's five areas: organization redesign, IT service management, application and service development, and servers and storage. (Vice President for Information Technology Ted Dodds is leading the fifth area, governance and decision making.)

The organization redesign work that was undertaken in the early part of the initiative has laid the groundwork for the four areas of implementation, said Craig Higgins, former ASP IT program manager and assistant dean for finance and administration for the College of Human Ecology.

The applications streamlining project is running pilot programs with the College of Agriculture and Life Sciences (CALS) and the Division of Student and Academic Services (SAS), said Rick MacDonald, IT planning coordinator. The pilots will include an inventory of the applications CALS and SAS use, an assessment of each application's cost/value ratio, and recommendations on how to move toward a portfolio of applications with lower costs and higher business values. Results are due in November, MacDonald said, and the goal is to apply the process to the whole campus.

The aim of the servers project is virtualization -- that is, replace individual servers scattered around campus with space on large server farms, Vernon said. The virtualization team has created an advisory board that has vetted the project's intent, scope, pricing models, timeline and several other aspects. It has begun discussions with colleges and units. There are now 700 virtual servers on campus, 300 of those added since the initiative began.

"It is clear that the strategy is dead on," Vernon said. "The challenge is how quickly [colleges and units] want to migrate."

The IT service management project has created teams that have made recommendations on next steps for streamlining desk top management and end-user support, said Nancy VanOrman, director of CIT support. Meanwhile, a private company, Third Sky, is assessing 13 IT processes in central IT; one of these processes -- incident management -- is also being assessed with IT service groups and other campus units, VanOrman said. For all three components, "We need to make sure we look for the quick wins -- things we can get in place right away that will provide relief to everybody and additional support," she said.

In response to a comment about the difficulty IT service groups face in providing desktop support management, VanOrman said she would be meeting with each IT service group director to review their needs. "There needs to be a very tight coupling and integration between the service groups and the support organization," she said. A set of remote management tools is also on tap, which should help ease the burden, she said.

The IT team members were also asked how savings from the initiative have been validated. Departments might have a hard time calculating their IT savings, especially when they must reallocate those savings, Vernon said. But baseline data show that the initiative is saving money campuswide. Cornell is also in the process of benchmarking its IT costs against those of Indiana University and the University of Virginia, he added.

Has the university calculated the cost of implementing the streamlining initiative? An early assessment found that the university would have to invest in infrastructure and personnel, Higgins said. "There is a recognition you have to spend money to save money."

Other questions centered on the pros and cons of developing software in-house.