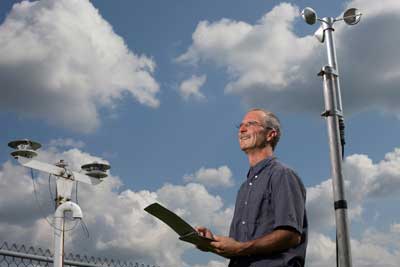 Jason Koski/University Photography
Art DeGaetano, professor of earth and atmospheric sciences, was one of three principal investigators for the report.

In 2080, will New York City residents take a submarine to work instead of the subway? Will vast irrigation networks be as commonplace in western New York as they are in the western United States? Will once rare catastrophic flooding in the Southern Tier become the norm?

The answer to many of these questions could be yes, according to 19 Cornell scientists who contributed to a historic report released Nov. 16 by the New York State Energy Research and Development Authority.

It concludes that shifting weather patterns are poised to affect everything from food and drinking water quality to the snowpack for winter recreation.

Heat waves are predicted to be more frequent and intense, requiring a greater power supply to keep air conditioners humming, particularly in the urban heat island of New York City, which currently accounts for half of the state's energy use. A rise in sea level -- predicted to be from 8 to 55 inches by 2080 depending on the degree of polar ice cap melt -- would jeopardize New York City's low-lying, coastal power plants, railways and transportation hubs.

In other parts of the state, irrigation systems might be regularly required to chaperone crops through heat waves. Average temperatures are expected to increase four to nine degrees Fahrenheit well before the end of the century, which could be detrimental to milk yields. Many of New York's iconic and economically important farm products -- including dairy, apples and maple syrup -- will require strategic adaptations to maintain current levels of production.

"Our goal was to provide decision-makers with cutting-edge information on New York's vulnerability to climate change and stimulate planning for adaptation," said Art DeGaetano, professor of earth and atmospheric sciences and one of three principal investigators for the report. "We have the capacity to address many of the risks ahead, buffer the negative impacts, and embrace new opportunities."

One such opportunity is a longer growing season, which could allow farms to diversify into new crops and varieties. European wine grapes grown in several parts of the state, for example, would likely grow better with a change in climate.

Cornell professors are working with municipalities to help them develop long-term planning strategies, such as increasing the size of storm pipes and siting wastewater treatment plants outside of high-risk flood plains.

David Wolfe, professor of plant and soil ecology who led the agriculture and ecosystems sections of the report, is also working with his colleagues to develop online decision-making tools to help farmers evaluate when to invest in adaptations such as expanded irrigation capacity or improved drainage systems.

"The Earth's climate is always in flux, but today's pace of change is far beyond what previous generations of farmers and natural resource managers have had to face," Wolfe said.

Stacey Shackford is a staff writer at the College of Agriculture and Life Sciences. Freelance writer Amanda Garris contributed to this report.