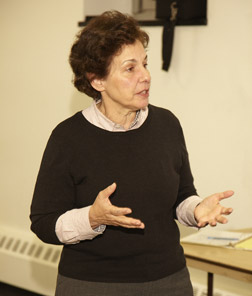 The benefit of each urban street tree is worth about $135 to a city for the many roles that it serves, said Cornell Professor Nina Bussak, speaking on the benefit of urban trees at 92nd Street Y in New York City Dec. 7. In fact, for every dollar spent on a tree, a city reaps some $5 worth of benefit, she said.

"Trees provide energy conservation: cooling in summer and wind-blocking in winter, carbon sequestration, removal of particulates from the air and the collection of storm water," Bassuk said.

Trees also have an aesthetic value, turning "third spaces" (first is home, second is work) like parks and public outdoors areas, into serene spots for rest, relaxation and recreation, she added.

Her talk is the first in 92Y's "Changing Earth" series of seven lectures, a partnership with Cornell Plantations; the series is part of 92Y's "First Class Science" adult education program.

Bassuk, a native of Brooklyn, leads Cornell's Urban Horticulture Institute, part of the Department of Horticulture. She is the co-author of "Trees in the Urban Landscape," a member of the New York State Urban Forestry Council, Sustainable Sites Committee and the recipient of the Scott Medal for Horticulture. Bassuk has worked in the field of horticulture for more 30 years and has a passion for helping trees thrive in the concrete jungles of America.

New York state's almost 4.5 million urban trees are worth some $560 million, she said.

But to survive in urban settings, trees face many challenges. "Trees are impacted by limited space, underground utilities, constant construction damage and poor drainage," said Bassuk. However, one of the most destructive elements of urban environments is the compacted rock-like soil found underneath pavement.

In urban areas, "soil is purposefully compacted to bear the load of pavement," said Bassuk. Since the root systems of most trees remain within the top 12 inches of ground, compacted soil limits a trees root system. "Soil is critical to a tree's long-term health," said Bassuk. To help trees survive by engineering urban sites to mitigate harsh conditions, Bassuk led a team that developed CU Structural Soil, which became available in 1999.

CU-Structural Soil is a patented mix of stone, soil and a sticky compound that makes a rigid lattice-like texture, similar to Swiss cheese. It creates enough load bearing to use under pavement while allowing a tree's root system to spread. CU-Structural Soil has been successfully used in more 1,000 sites in the United States -- including the Ithaca Commons -- Canada and Europe.

The next speaker from Cornell in the lectures series at 92Y will be Don Rakow, the E.N. Wilds Director of the Cornell Plantations, who will discuss the benefits of green spaces in our lives March 14.

John Mikytuck '90 is a freelance journalist, writer and producer in New York City.