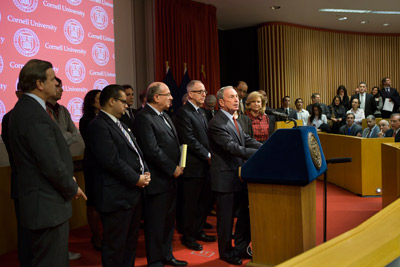 Jason Koski/University Photography
Peter Meinig, chairman of the Cornell University Board of Trustees, and Jan Rock Zubrow, chair of the board's Executive Committee, savor the moment. 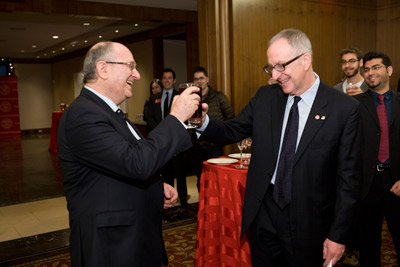 Robert Barker/University Photography
Lavie and Skorton toast each other at a reception following the announcement.

NEW YORK -- The news was met with cheers from live-streamed supporters on two continents. After months of negotiations, cheerleading and pleading their case, Cornell and partner The Technion -- Israel Institute of Technology was announced the winner of a bid to build a groundbreaking new campus in New York City Dec. 19.

New York City Mayor Michael Bloomberg named Cornell and Technion the winners of his highly publicized competition to create what he called a "game-changing" applied sciences and technology campus. The project, he said, promises to spur economic growth, job creation and high-tech entrepreneurship.

The announcement came at a press conference at Weill Cornell Medical College that was packed with New York City media, Cornell and Technion leadership, Cornell alumni and other supporters. It followed just days after Cornell announced a $350 million gift in support of the tech campus.

Congratulating the winners, Bloomberg invoked Cornell's history as New York state's land-grant university. With the promise of an 11-acre parcel on Roosevelt Island and $100 million in infrastructure improvements from the city, Bloomberg called the proposal a "new land grant" that will power economic growth.

"We believe this new land grant can help dreamers and entrepreneurs from around the world come to New York and help us become the world's leading city for technological innovation," Bloomberg said.

Cornell's united front in support of the new campus was symbolized by a live shot, shown during the announcement, of students and alumni who packed an overflow room at Weill Cornell. Cheering supporters at Technion were also broadcast from Haifa.

In the months since Cornell first announced its intention to win the bid, there was mounting evidence that it had support from many corners -- a fact not unnoticed by the mayor and his staff. Deputy Mayor Bob Steel mused that of the approximately 50,000 New York area alumni, "most of them called me directly"; others sent him a book of 21,000 signatures petitioning for Cornell's bid.

This groundswell was a large factor in Cornell's success, noted Cornell Provost Kent Fuchs: "I think we were the only university that had unanimous support from the administration, faculty, staff, students and alumni."

The Cornell-Technion proposal, Bloomberg said, was the boldest and most ambitious, as it included an enrollment of 2,500 students, 300 faculty and 2 million square feet of state-of-the-art classroom and research space. He talked about the dynamic partnership between Cornell and Technion. He praised Cornell's established presence in New York City with its Weill Cornell Medical College, many academic and extension programs, and its active alumni base.

The campus is expected to generate $23 billion in economic activity over the next three decades, Bloomberg said, as well as $1.4 billion in tax revenue. Building it will create 20,000 construction jobs and 8,000 permanent jobs to operate it. These jobs, Bloomberg added, run the gamut from building staff to office workers -- not just "people with Ph.D.s."

"Thank goodness, because maybe I could get one of them," he joked.

Finally, he noted the aggressive schedule to which Cornell has pledged to get the campus up and running, with Phase I planned to be completed in 2017.

With "humility" and "gratitude," President David Skorton described the win not as a "touchdown dance" for Cornell or Technion, but as a boon for New York City and a demonstration of the two institutions' desire to serve the city's high-tech future. With this "vote of confidence," Skorton also pledged to work with K-12 schools, the CUNY and SUNY systems, and the city as a whole to make the partnership even more fruitful.

"This is not an exercise in exclusion or winning," Skorton said, before wowing the crowd with a digital fly-through of a campus rendering. "This is an exercise in inclusion and having all the ships rise in this fine city."

Technion President Peretz Lavie spoke warmly of the newly forged partnership with Cornell and New York. "We are not going to have an extension of Cornell or Technion," Lavie said. "We are going to have something new ... that will really energize this city."

At a reception to celebrate the day's success, Shay David, Ph.D. '08, co-founder of New York-based Kaltura, an open-source video company, said: "We have constant challenges with hiring engineers. The capability of getting local talent was absolutely fascinating."

Now Cornell will get down to business: The first students will start in temporary off-site space in the fall, according to Fuchs, and the university expects to break ground by 2015.