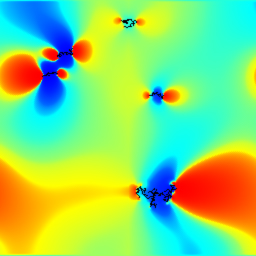 Provided
A color map of a simulated material with cracks, which are represented in black. The colors signify the stress around the cracks, with red being highest stress and blue the least.

It doesn't happen often, but structures like bridges, airplanes and buildings do fail, sometimes catastrophically. What are the odds, and how can it be prevented? Cornell physicists are using computer modeling to find out.

A team led by James Sethna, professor of physics, and graduate student Ashivni Shekhawat have published new theoretical insights into the probability of structural failures, based on hundreds of thousands of computer simulations. Their work appeared online Feb. 10 in the journal Physical Review Letters (Vol. 108, Issue 6).

Traditionally, engineers have calculated the odds of failure by relying on mathematical theorems that allow extrapolation independent of the details of how and why individual structural components, like beams in a bridge, fail.

The Cornell researchers, joined by colleagues in Italy, Finland and at Oak Ridge National Laboratory in Tennessee, assert that their calculations provide a much more specific and accurate way to predict structural failure. Their models are based on how different sizes and shapes of cracks, even microscopic ones, form and grow.

They focused mainly on a class of materials considered brittle, a classic example being glass. They used a computer program to model billions of cracks, which allowed them to predict how structural elements -- such as the bridge beams -- would hold up under different stresses and loads.

Comparing their results with the traditional way of extrapolating failure rates, they found that they could far more accurately predict when and how the material would fail.

The research was supported by the U.S. Department of Energy.