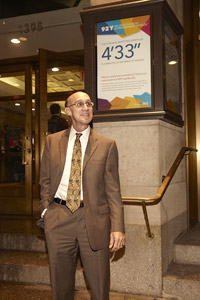 David Gipson
Don Rakow stands in front of the 92nd Street Y, where he gave a lecture March 14 on the roles of botanical gardens and arboreta.

Promoting the beautification of neighborhoods, providing healing sanctuaries for those recovering from surgery, and educating visitors of all ages about nature and the environment are among the many roles botanical gardens and arboreta play in local communities today, said Donald A. Rakow, Elizabeth Newman Wilds Director of Cornell Plantations, addressing the importance of today's public gardens at New York City's 92nd Street Y March 14.

"The 21st-century public garden is a center of art, conservation, research, outreach and healing that educates generations about plants and the natural world," Rakow said. "Public gardens and horticultural societies are about building an appreciation and understanding of the role of plants in the natural world and taking an advocacy role in support of that mission."

According to research, Rakow said, by 2050, one-third of all known plant species could be lost. Public gardens address this threat to biodiversity through such organizations as the Center for Plant Conservation, a network of 37 public gardens doing research, restoration and advocacy work on behalf of rare and endangered species.

New trends in design and development enable public gardens to protect the environment as well. The Phipps Conservatory and Botanical Gardens in Pittsburgh, for example, is one facility that has, according to Rakow, utilized the "most progressive engineering" in designing a visitor's center and tropical greenhouse. Its new Center for Sustainable Landscapes will be one of the world's first certified living buildings, generating its own energy and capturing and treating its own water on site, meeting or exceeding the highest green standards for buildings or landscapes.

The Cleveland Botanical Garden, on the other hand, founded a work/study program that hires high school students to turn vacant lots into urban farms. "They grow fruits, vegetables, and flowers -- and develop job skills, leadership and a healthier, greener community," Rakow said. "Ultimately, these young people learn to appreciate the Earth's capacity for abundance and, in the process, realize their own abundant potential."

Transforming urban degradation, fueling tourism and elevating the aesthetic appeal of cities are other ways in which public gardens improve municipalities, he said. Such efforts engage residents with cultural exhibits, collections and special events reflective of their demographics. The annual Chili Festival and Sakura Matsuri Cherry Blossom Festival hosted by the Brooklyn Botanic Garden are examples.

In addition to educating and reconnecting people with nature and their ethnic heritage, encouraging fitness and exercise and even tackling childhood obesity, public gardens employ horticultural therapy, said Rakow, pointing to the Enid Haupt Glass Garden at New York University's Rusk Institute as an example. It has been offering therapeutic programs for those coping with physical and psychological challenges for four decades.

"Public gardens are places in which visitors -- of all ages, ethnicities and abilities -- can delight in the beauty of nature, and the remarkable ways in which we humans can work with plants. In an urbanized, high-stress and uncertain society, don't we need such institutions now more than ever?" Rakow concluded.