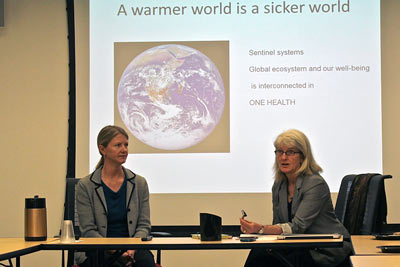 Climate warming might be inviting something less delightful than T-shirts year-round: the mosquito-borne chikungunya virus, warned two Cornell scientists at an Inside Cornell media luncheon May 8 at Cornell's ILR Conference Center in New York City.

Most people infected with chikungunya recover fully, and serious neurological complications have been rare, they said, but research about the virus is incomplete, the professors emphasized.

In New York City, the potential for outbreak is critical because it "is a major port of entry for the U.S. where people might be coming from places with chikungunya," such as tropical Africa and Asia, said Harrington.

Already, the Asian tiger mosquito is established on Long Island and in New Jersey after it was introduced to the United States in the 1980s. Climate change, Harrington said, would widen New York's peak risk period, which is now July through the rest of the summer. The first case of chikungunya illness in New York City was diagnosed in 2007; in 2005-06, the Centers for Disease Control reported 12 cases of chikungunya in the nation.

In a laboratory study, Harrington said that she and colleagues found that 80 percent of a strain of Asian tiger mosquitoes in the N.Y./N.J. region is able to catch the virus and transmit it in their saliva.

Furthermore, the study suggested a 38 percent peak probability that a single, infected person might start an outbreak in New York City. This research, however, used models that skewed mosquito populations based on hotter summers in the future.

"The virus has already mutated," warned Harrington. "It's no longer exclusively self-limiting."

Climate change has already extended the scope of the potentially fatal and neuro-invasive mosquito-borne West Nile Virus, which has become permanently established status in New York City, Harrington said. Although the Department of Health and Mental Hygiene has control systems in place for the West Nile Virus, it does not specify a detection system for chikungunya, she said.

"We need to raise awareness with public health officials," said Harrington, "and learn the lessons from the unexpected proliferation of West Nile."

"Prevention is key," she affirmed, recommending the use of repellents containing DEET or picaridin such as the active ingredient in the Cutter brand; turning on fans since their airflow overwhelms weak-flying mosquitoes; and eliminating any standing water.

Climate warming is also responsible for international coral bleaching and coral diseases and range expansions of oyster diseases, and warming may also be responsible for the mysterious deaths of seabirds and dolphins in Peru, Harvell said. One-quarter of our greenhouse gas emissions are absorbed by the oceans, she added, causing acidic oceans that have triggered large oyster fishery declines in the Northwest.

Warmer temperatures can stress organisms, she said, which can make them more susceptible to disease and trigger more rapid growth of pathogens.

"A warmer world is a sicker world," concluded Harvell.