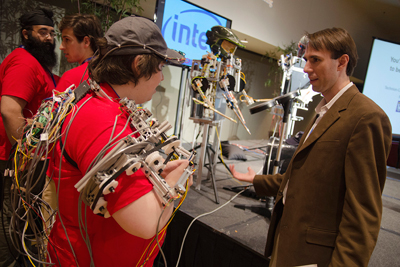 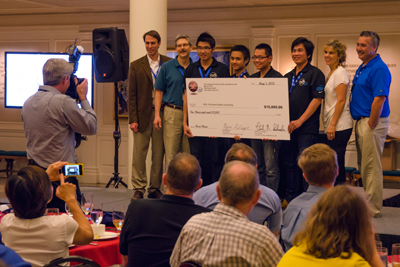 A device that uses image processing to instantly identify a prescription drug took top honors at the first Cornell Cup USA Presented by Intel, which charged 21 finalists with dreaming up and executing a useful embedded technology powered by the Intel Atom processor.

Winning was "amazing," said team leader Hung Nguyen. "Just to come here was a big achievement for us," he said.

Second-place winners HAWK, of the University of Pennsylvania, built a sensor-enabled aircraft platform for constructing 3-D building models for search-and-rescue operations. Third place went to Team Squirtle, from the Massachusetts Institute of Technology, which made a robotic liquid handler. Ten additional teams received honorable mention awards. University of Pennsylvania's Kinecthesia, which made an obstacle-detecting wearable belt for the blind, received the People's Choice award, chosen by ballot.

The Cornell Cup, which took place May 4-5 at Walt Disney World, Lake Buena Vista, Fla., was modeled after the Intel Cup China. Unlike other design contests, which require students to build something specific like a race car or submarine, the field was wide open for ideas.

"This is really about student training and giving them hands-on experience," said Kimberly Sills, manager of Intel's University Programs Office. "It is a nice rounded exposure to different technologies."

In searching for the right university partner to start a U.S. version, Intel officials met David Schneider, Cornell Cup student team adviser and lecturer in systems engineering, who co-founded the event with Sills and Byron Gillespie, director of the Intel University Embedded Program.

During the competition, Schneider announced there would be a second Cornell Cup in 2013 -- news greeted with cheers. The Cornell student team, though not competing, revealed a modular robotic design they built specifically for future Cornell Cup competitors. Throughout the competition, they also ran demos of their own embedded design project: a set of robots that can play the Xbox game Rock Band.

Among the most important educational components of the competition, Schneider said, was teaching students about professional design using systems engineering concepts. Judging criteria included identification of key functionality, measures for meeting a problem's needs, and novelty of systems or features. Equally important were the students' abilities to communicate clearly about their projects and to field difficult questions.

The judging rubric seemed to work, said Hencey, who was "pleasantly impressed" with the quality of the projects. They ranged from a network of temperature sensors to optimally heat or cool a home (Southern Illinois University-Carbondale), to Vermont Technical College's crowd-pleasing automated drink mixing machine aimed at facilitating responsible alcohol consumption.

"But based on our criteria, the best really stood out," Hencey said.