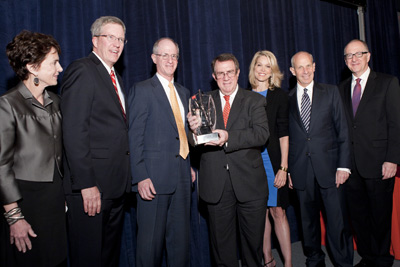 At the American Museum of Natural History in New York City, 900 Cornell alumni, senior industry leaders and friends from 17 countries gathered to celebrate the lifetime achievements of the Tisch family at the School of Hotel Administration's (SHA) Fourth Annual Cornell Hospitality Icon and Innovator Awards. The family was honored with the 2012 Cornell Icon of the Industry Award, and Andrew '71, James '75 and Jonathan Tisch were on hand to receive the award on the family's behalf.

Also at the event, Katie Taylor, president and CEO of Four Seasons Hotels and Resorts, was honored as this year's recipient of the Cornell Hospitality Innovator Award. The event also celebrated SHA's 90th anniversary.

Paula Zahn, the eight-time Emmy award-winning former news anchor, was the emcee for the evening.

In a room that included such luminaries as previous Icon award winners Chuck Feeney '56 and members of the Hilton family, as well as Robert Beck '42, Ph.D. '54, SHA dean emeritus, the Tisch contribution to the hospitality industry and the broader community was clear. Time and again, the audience rose to its feet in sustained ovations.

"Jon Tisch has been a voice for the importance of top quality service, for peerless customer experience and for the responsibility we all share to serve as agents of change for the better," said Nancy Novogrod, editor in chief of Travel + Leisure and senior vice president for the event's title sponsor, American Express Publishing, on the family's dedication to excellence.

Cornell President David Skorton congratulated the Tisch family on their deep commitment to the community that extends into health care, education, the environment and the arts, he said.

"Having attained enormous success in business," Skorton said, "they've used their talent and their resources and their vision and their hearts to reach out in creative ways to affect positively countless other lives."

The impact of the Tisches is felt particularly in New York City, where they provided pivotal support for the Tisch School of the Arts at New York University, the Tisch Children's Zoo at Central Park, the 92nd Street Y and the American Museum of Natural History.

The event also recognized the pioneering work of the Four Seasons' Taylor, who manages a portfolio of 86 resorts and hotels in 35 countries. Since she was named CEO in 2010, the company has pursued broad growth and corporate responsibility strategy, including Four Seasons' long-term commitment to plant 10 million trees around the world.

Presenting Taylor with her award, Michael Johnson, dean and E.M. Statler Professor of Hotel Administration at SHA, said, "With Katie at the helm, the company is undertaking the most significant expansion effort in its history."

"It's one thing to be acknowledged by such a prestigious institution," Taylor said. "It's another to do so surrounded by the icons and leaders of this industry, some of whom have been the recipients of this award over the last few years."

Though not a Cornellian herself, Taylor said that Cornellians' impact over the years was significant because so many current and former Four Seasons employees are SHA graduates.

"I am a Cornell wannabe," Taylor said to resounding applause, "and now I have my lifetime certificate."

Claire Lambrecht '06 is a freelance writer based in New York City.