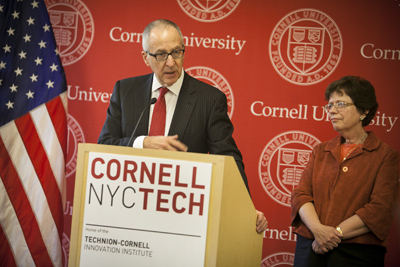 Cornell University and the U.S. Department of Commerce (DOC) announced a groundbreaking partnership in New York City Oct. 2 to speed commercialization of ideas generated at Cornell NYC Tech. It is the first time a U.S. government agency has joined forces with a university to give students and researchers direct access to resources to bring ideas -- and the companies and jobs they create -- to market.

"What's thrilling for me is that it's not just the patent and trademark office, and even in a sense not just the Department of Commerce," said Cornell President David Skorton at a news conference announcing the partnership. "This is a conduit for the U.S. government to be working directly with the innovation community. So that we have city government in the City of New York, the federal government, the private sector and academia all working together to figure what's the right place for intellectual property in one of the areas of our economy that is growing like crazy right now."

In addition to one-on-one assistance to researchers, "The bigger issue is figuring out together the sweet spots for intellectual property protection for the tech industry," said Skorton. "Depending on the area that we're talking about, the range of approaches goes all the way from open-source software through trade secrets and patents."

According to a recent Department of Commerce report, intellectual property-intensive industries supported 40 million jobs in 2010 and contributed $5 trillion to the U.S. economy. By providing commercialization tools for entrepreneurs, the partnership aims to drive job growth and serve as a forum to explore ways to balance the free flow of information.

"By bringing the full suite of our innovation-enabling resources to bear on this campus, we're not just able to meet the research, development and commercialization needs of regional enterprises in real time -- we'll also be able to test new ways to move ideas from the lab to the marketplace," said U.S. Patent and Trademark Office Director David Kappos in a press release. "This collaboration allows us to optimize intellectual property for the 21st century and further empowers universities to fuel our nation's innovation ecosystem."

Sue Purvis, a senior member of the DOC's Patent and Trademark Office, will be based at the tech campus and serve as the innovation and outreach coordinator for the greater New York region. She will connect Cornell NYC Tech students and faculty to early stage investors, intellectual property strategies, export assistance tools, government grants and academic partners. The DOC is also supporting programming initiatives for the public in areas related to multidisciplinary research, industry mentorship opportunities, commercialization strategies and educational outreach in STEM (science, technology, engineering, mathematics) fields.

What makes New York any different from Silicon Valley or Boston?

"New York is the place where innovators want to live, not only to work but also to play," said Sen. Charles Schumer (D-N.Y.) at the press conference. "It has capital, and it is a cultural capital."

"Cornell NYC Tech has always been envisioned as both a birthplace of new ideas as well as a driver of economic growth," said New York City Mayor Michael Bloomberg in a press release. "We are all looking forward to seeing innovative new products come to market and create jobs in New York City."

In December 2011 Bloomberg selected Cornell, with its academic partner the Technion--Israel Institute of Technology, to create an applied science and engineering campus in New York City. While currently located in the Chelsea neighborhood of Manhattan, the graduate-level campus will move to Roosevelt Island in 2017.