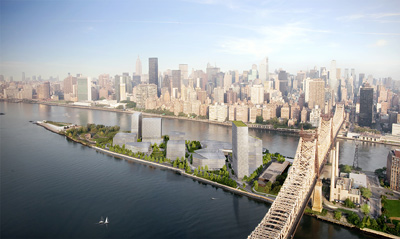 Kilograph
An early rendering of the proposed campus at full build. 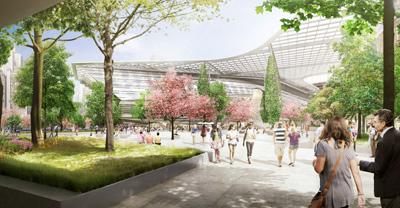 Kilograph
The tech plaza, with the first academic building and proposed solar canopy in the background. 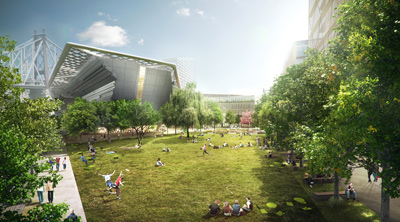 NEW YORK -- Cornell NYC Tech, Cornell's initiative to build a world-class technology and entrepreneurship campus in New York City, has entered the seven-month land use review process for its new Roosevelt Island campus, slated to open in 2017. The campus is scheduled to be completed in 2037.

To mark the beginning of the process, Cornell Tech released new images of the campus, including preliminary renderings of its first academic building, which is planned to be a net-zero energy building that harvests as much energy as it consumes.

"Just as Cornell Tech will be pioneering new approaches to graduate research and education, our campus won't look like any other university campus that exists today," said Daniel Huttenlocher, dean of Cornell Tech. "We are determined to innovate in every aspect of the development, from the way that students, faculty, researchers, industry and the community are intermingled, to the sustainability of our buildings and their iconic architecture."

The campus is being designed to connect with the city and with Roosevelt Island via a new pedestrian walk that opens onto a series of central open spaces accessible to the public. The design will capture views of the Manhattan and Queens skylines and link to the Southpoint and new Four Freedoms parks at the Island's southern tip.

Buildings will be designed to connect outdoor and indoor spaces, highlighted by a large public café on the academic building's ground floor that spills into the open space.

The plan to achieve net-zero energy for the academic building is centered around a rooftop photovoltaic canopy that will generate much of the energy needed to make it one of the largest energy-neutral buildings in the U.S.

"While we officially start the public review process today, Cornell Tech has worked hard over the past nine months to create a robust dialogue with our new neighbors on Roosevelt Island and across the city," said Cathy Dove, vice president of Cornell Tech. "The campus plan was designed to be open to everyone, and we look forward to sharing this unique vision with all New Yorkers over the next seven months and beyond."

Construction on Roosevelt Island is expected to begin in 2014, with the first phase of the campus due to open in 2017. Current plans for Phase I include the first academic building, a corporate co-location building, an executive education center with hotel facilities, a residential building for students, faculty, and staff, as well as more than one acre of public open space. When completed in 2037, the campus will include up to 2.1 million square feet housing approximately 2,000 full-time graduate students.

The start of the public review process for the Roosevelt Island campus is a major milestone for Cornell Tech. The campus is already operating in its temporary space donated by Google in Chelsea, and is accepting applications for a "beta" class of computer science master of engineering students, which will begin classes in January.

Cornell Tech will soon launch additional academic programs and is actively recruiting faculty while developing a distinctive new model of tech entrepreneurship. Earlier this month, Cornell Tech announced a first-of-its-kind partnership with the U.S. Department of Commerce to bring full-time U.S. Patent and Trademark Office personnel to the campus to promote innovation and economic development.

Cornell, with its academic partner the Technion-Israel Institute of Technology, was selected in December 2011 by New York City Mayor Michael Bloomberg to build the applied science and engineering campus, which will offer a distinctive model of graduate technology education that fuses academic excellence with real-world commercial applications and entrepreneurship.