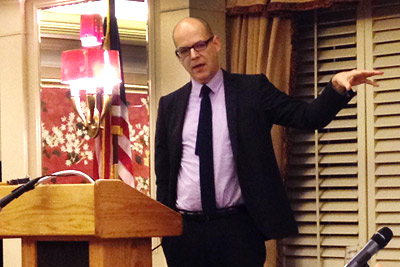 On international issues, "Most of what you hear ... is yawning rhetoric masking narrow differences," said Kirshner, professor of government and director of the Judith Reppy Institute for Peace and Conflict Studies, of President Barack Obama and Republican presidential nominee Mitt Romney. The two candidates have fundamental differences in their economic and social agendas, Kirshner emphasized, but on foreign policy, "with a couple of exceptions, there won't be a lot of difference."

Logevall, the John S. Knight Professor of International Studies and director of the Mario Einaudi Center for International Studies, said that he was in full accord with Kirshner's assessment of executive power in regard to foreign policy. "Presidents, when they come into office, usually find that they have to respond to events much more than they can carry out their own [agenda]," Logevall said. "The United States does not have the ability to solve problems or address things in the way that the candidate might have said on the campaign trail."

Rather than rhetoric, economic and geopolitical realities shape American foreign policy, Kirshner said. Opportunities for new, ambitious international initiatives are "very limited … given that we're essentially winding down two wars and by the fact that we're entering an era, no matter who wins, in which there'll be more constraints on budgets."

The reality of governing is just one of the factors that temper campaign trail rhetoric. Another factor involves the strong similarities among people who work in the field of foreign policy at all levels of the federal government -- from U.S. Department of State employees to the National Security Council -- regardless of political affiliation, Logevall said. "You tend to find people who trained at the same institutions, who tend to adhere in almost all instances to the idea that the United States should remain a hegemonic power, that the United States remains indispensable in world affairs," he said.

Where the pair of presidential candidates might differ is in the choice of individual political advisers. "Depending on what set of advisers Mitt Romney has around him as president, we could in fact see starker changes than Jonathan and I are inclined to believe," Logevall said. He noted that at present, names being floated for the top foreign policy posts in the Romney cabinet include Robert Zoellick, the former president of the World Bank, and Condoleezza Rice, the former U.S. secretary of state.

Another distinction involves the difference in political pressure between a first-term president and a second-term president. "Obama, if he wins, will be in his second and final term." He won't need to worry about positioning himself for re-election, he added "It's not inconceivable that he would be bolder, that we would see more policy changes to foreign policy under a second Obama administration than a first Romney administration," Logevall said.

Even with these factors in mind, however, both said that the trend was one of vanishing differences rather than expanding differences.

"No matter who wins, I think foreign policy is going to be characterized much, much more by continuity than change," said Kirshner.

The discussion was hosted by Cornell's Mario Einaudi Center for International Studies.

Claire Lambrecht '06 is a freelance writer in New York City.